Key works from the Hepworth Wakefield collection, including several given to the gallery through the Art Fund, will be travelling south for an exhibition at the London Art Fair. 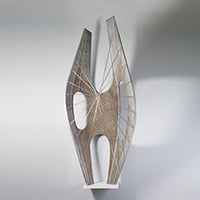 Titled Barbara Hepworth and the Development of British Modernism, the exhibition will chart the rise of modern art in Britain through a selection of key works from the Hepworth Wakefield collection. Pieces by Barbara Hepworth herself, her husband Ben Nicholson and friend Henry Moore will form the centrepieces of the show, supported by additional works from St Ives artists including Terry Frost and Patrick Heron.

The exhibition will include several works from the Hepworth Family Gift, which was given to the gallery through the Art Fund in 2010 and features 44 of Barbara Hepworth's working models, along with lithographs and screenprints. Chief among the pieces on show will be the prototype for Barbara Hepworth's monumental Winged Figure (1961–2), a model for the iconic sculpture she created for John Lewis on Oxford Street.

The Hepworth Wakefield opened in 2011, becoming Britain's largest purpose-built gallery outside of London. It has received over a million visitors to date, and in 2013 it opened a new contemporary art display space, The Calder. It was named after the Wakefield-born sculptor Barbara Hepworth, and has become one of Yorkshire's greatest cultural destinations.

The London Art Fair, including Barbara Hepworth and the Development of British Modernism, is open 15–19 January 2014. Save £5 on entry when you present your National Art Pass.