Ruin lust: The allure of the wrecked

With Ruin Lust currently showing at Tate Britain, writer Lewis Dartnell breaks down the appeal of ruins – from Tintern Abbey to the Ruins of Detroit. 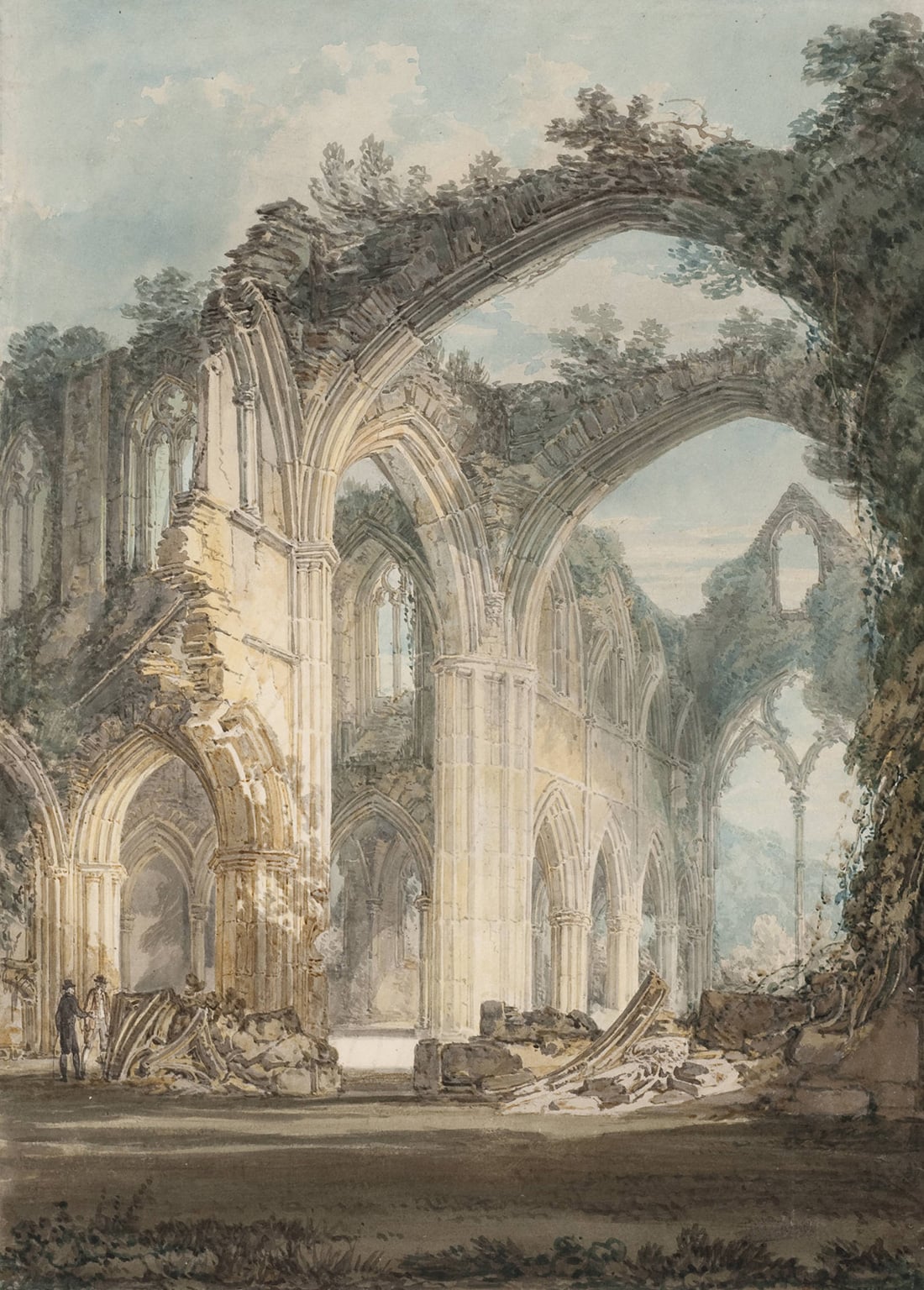 It’s partly a gleeful delight in the aftermath of rapid destruction or slow decay, partly the melancholic beauty of the vanished grandeur in the fragments that remain. But it’s also something much more symbolic than that. Ruins evoke a sense of foreboding and uneasiness – the source of their deep frisson is not that they speak about the past, but about the future.

Ruins are a premonition, a warning from history about our own inescapable destiny. They are a reminder that all will eventually be lost, even that which is once grand and mighty. In this way, every ruin acts as a memento mori – an allegory of death and decay, as used by Renaissance painters: a bowl of fruit, a sandtimer, or the anamorphic skull in Holbein’s The Ambassadors. These are reminders of the transience of beauty and the impermanence of all things, including our own lives. And in the case of Roman or Mayan ruins, for example, a stark demonstration of not only the mortality of us all as individuals, but that even entire civilisations themselves are fragile and can collapse and die. This allure of the wrecked has come to be known as ruin lust, and the artwork and photographs that serve to gratify this urge are thus ruin porn.

But even though ruins have existed for as long as humanity has been constructing, ruin porn as a cultural phenomenon is relatively recent. Even in Renaissance art, although classical ruins do feature, they are incidental to the focus of the painting: crumbling pillars and arches as no more than staging for the theological diorama. Ruin lust grew with fervour from the 18th century: the soft, pastel hues of JMW Turner’s Tintern Abbey (pictured), Hubert Robert’s Imaginary view of the Gallery of the Louvre as a Ruin, the ruined cathedrals and shipwrecks of Caspar David Friedrich, and Gustave Doré's The New Zealander. Eighteenth-century English aristocrats even went to the extent of constructing fresh ruins on their estates – follies – for exhibiting their wealth and sophistication while picnicking in the shade of the contrived remnants. The Victorians in particular were obsessed with the decline and fall of Rome and conscious that their mighty, globe-spanning British Empire could also succumb to chaos and disintegrate.

The effect is especially profound when the skyline of entire cities is laid to waste. This indulgent portrayal of ruination is particularly prevalent today in the special effects of big-budget Hollywood blockbusters. But there is a subtle though crucial difference in the nature of this destruction between disaster movies and post-apocalyptic films. The money shot in a catastrophe movie invariably revels in the obliteration of famous buildings and monuments. But in future dystopias, the role required of the ruin porn is to provide viewers with context to the scene and deliver the feeling of discomfort from the incongruity of the familiar landmark and the new world order around it. This means that in apocalyptic films the familiar landmarks are the first to be destroyed; but in post-apocalyptic movies they are all that remains. The pinnacle example of this latter function is perhaps in the Planet of the Apes: only the hand of the statue endures on the beach.

And the modern expression of ruin porn extends far beyond gritty photography of abandoned, dilapidated urban spaces like Yves Marchand and Romain Meffre’s haunting images of Detroit in decline and the cinematography of post-apocalyptic films like Mad Max, The Postman, I Am Legend, The Road, The Book of Eli and Cloud Atlas. There have also been a number of successful recent computer games that excel in this aesthetic, such as Fallout 3 and The Last of Us. My own interest in this fascination with societal collapse and the post-apocalyptic world is based on a thought experiment on the fundamental principles and processes that support our everyday lives. My new book The Knowledge: How to Rebuild our World from Scratch addresses how you could reconstruct the entire interlinked system of modern civilisation from the basics, if you ever had to.

So in this case, ruin lust not just as a memento mori to remind us of the impermanence of individual lives or whole societies, but as a rallying cry to think about how you could orchestrate a rapid recovery if the worst case were ever to happen.

Ruin Lust is at Tate Britain, London, until 18 May.

Dr Lewis Dartnell is a research fellow and author of The Knowledge: How to Rebuild our World from Scratch. Explore more content and join the discussion at the-knowledge.org or follow @KnowledgeCiv on Twitter.