To mark the 40th anniversary of the artist’s death, we highlight some of his most telling works on public display. 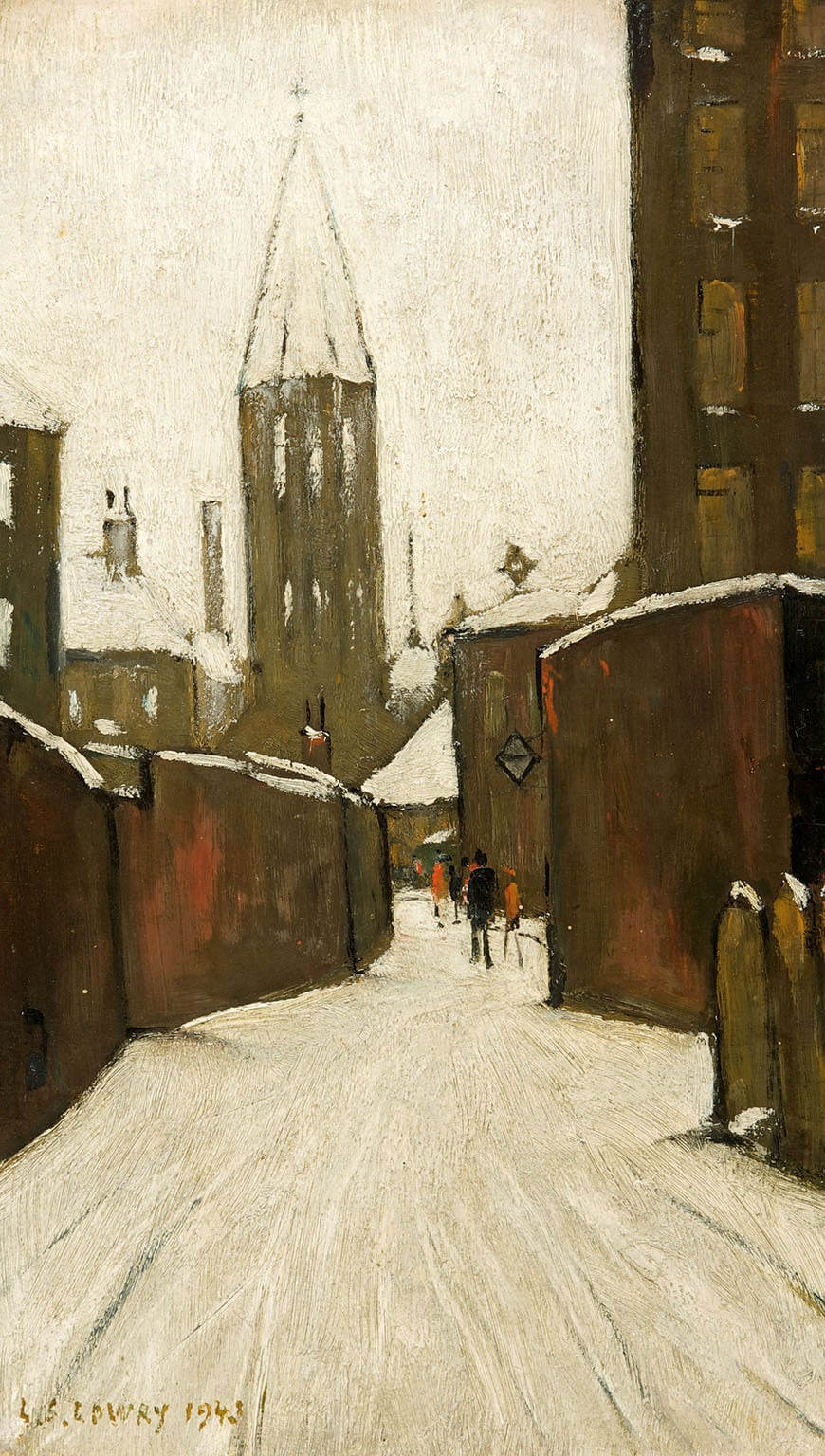 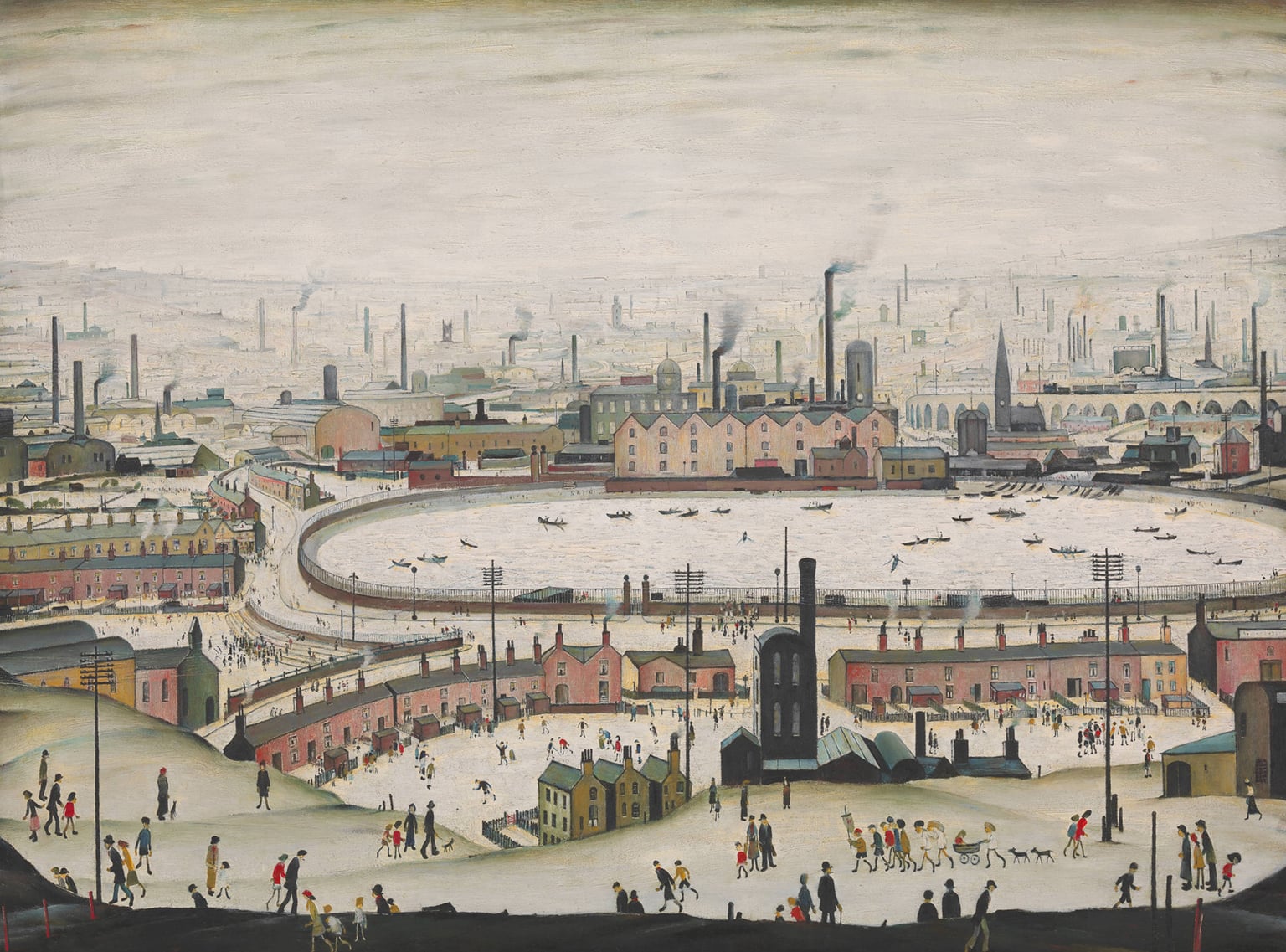 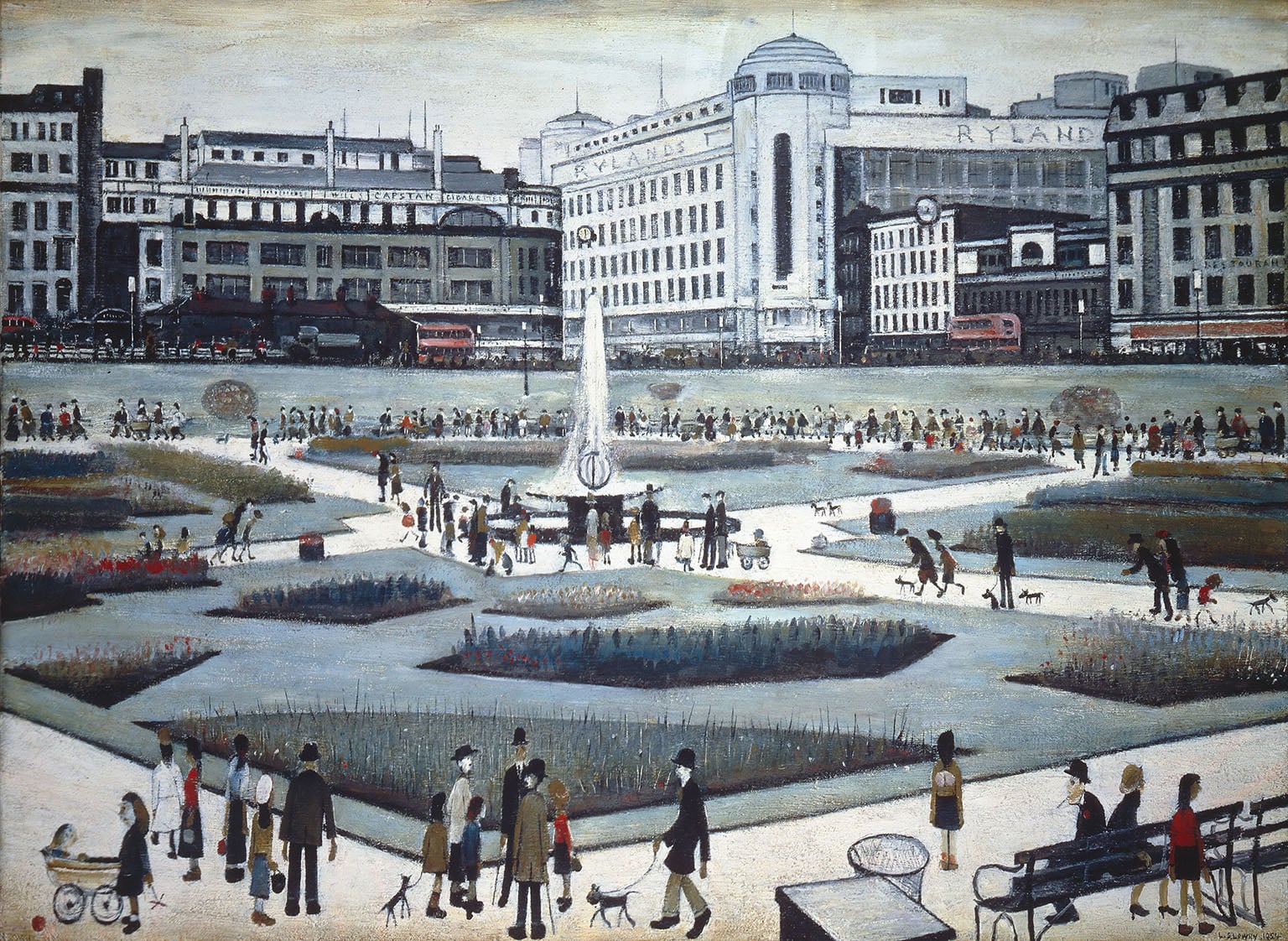 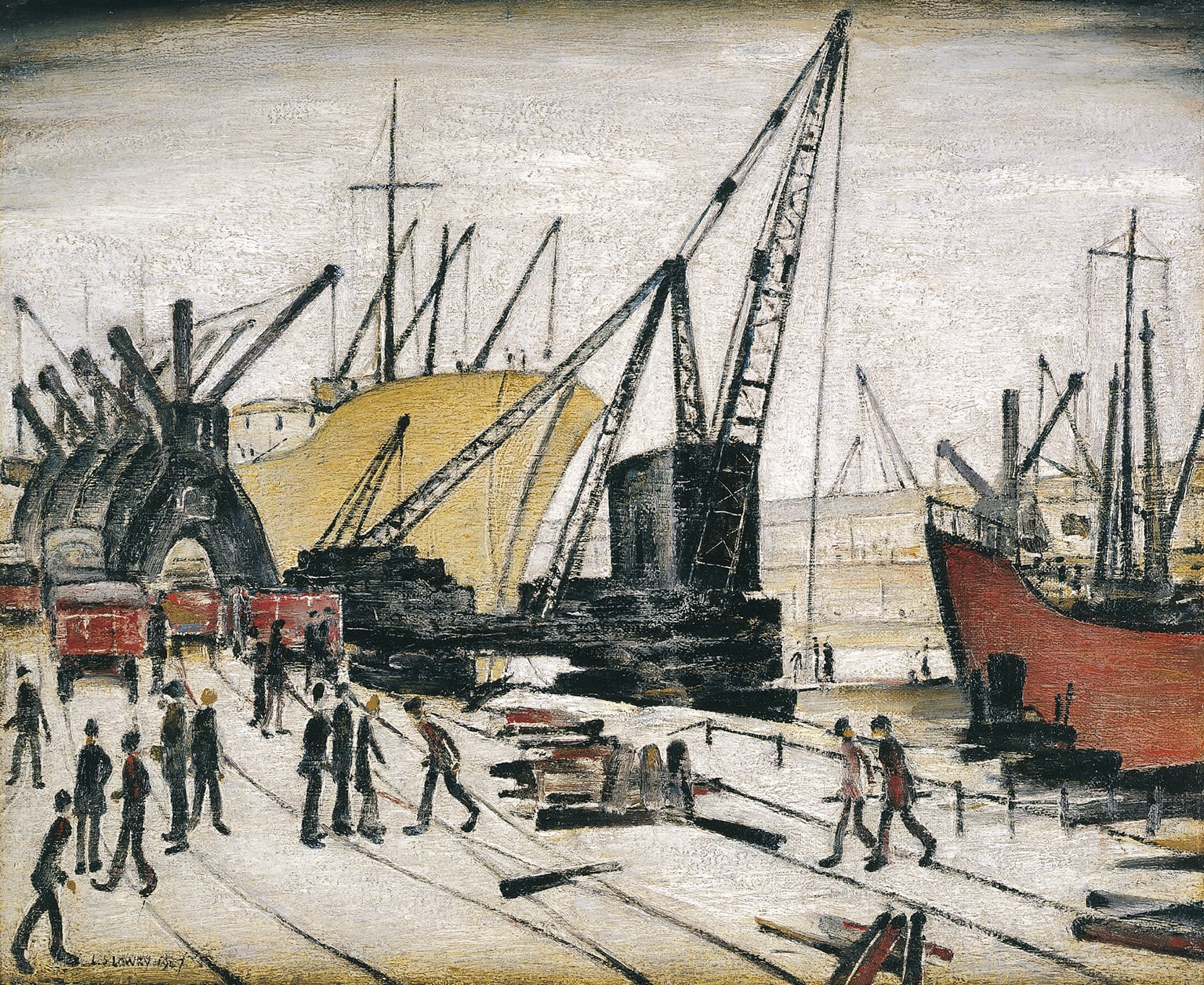 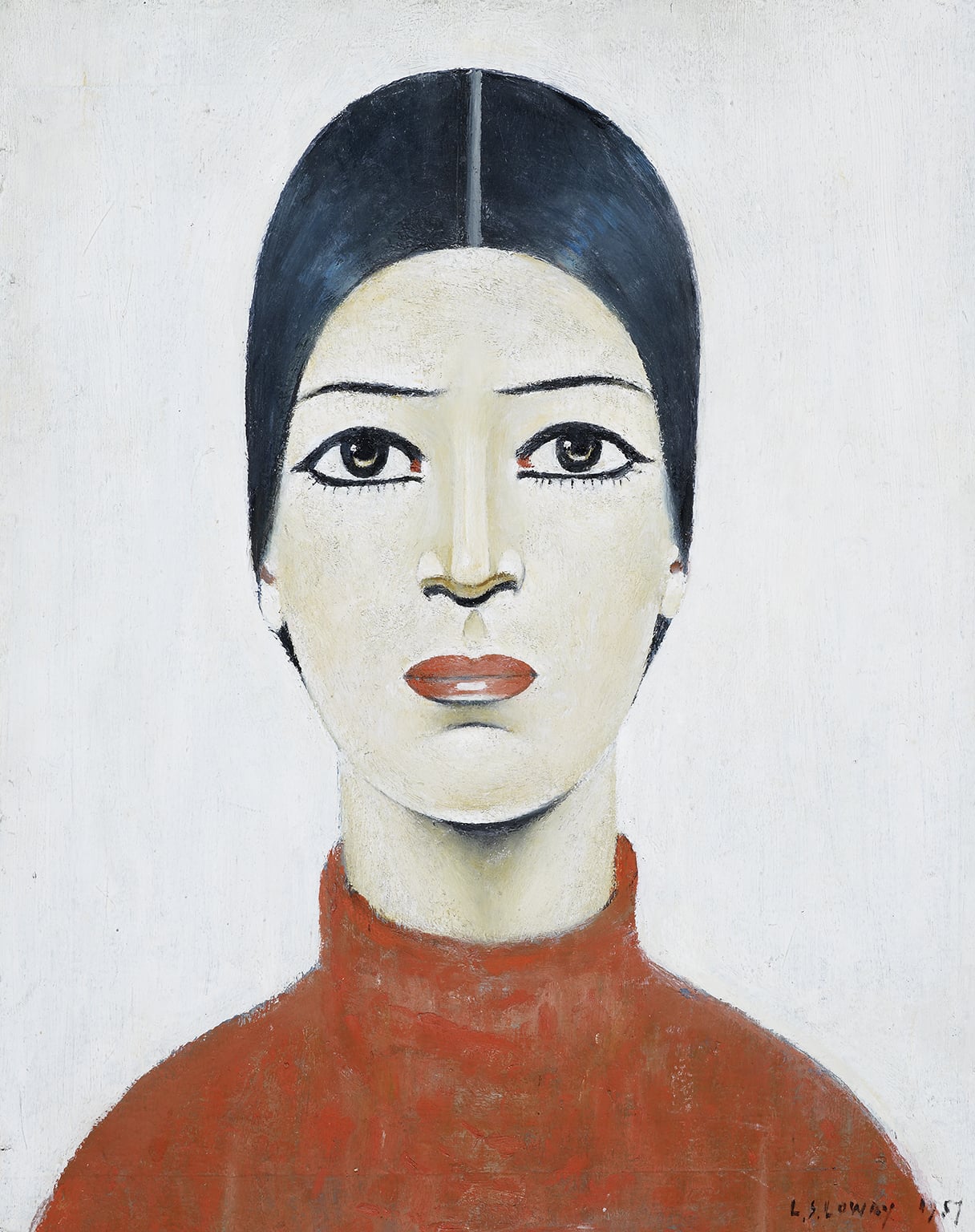 Lowry spent his early years in a leafy Manchester suburb of Victoria Park, Rusholme. However, at the age of 22, due to financial pressures, his family moved to the industrial town of Pendlebury. ‘At first I detested it,’ he wrote. ‘One day I missed a train from Pendlebury - [a place] I had ignored for seven years – and as I left the station I saw the Acme Spinning Company's mill ... The huge black framework of rows of yellow-lit windows standing up against the sad, damp charged afternoon sky. The mill was turning out ... I watched this scene – which I'd looked at many times without seeing – with rapture.’

Well known for painting industrial landscapes, Lowry considered The Pond one of his finest. ‘My ambition was to put the industrial scene on the map, because nobody had done it,’ he said. The Industrial Revolution is a story we tell about progress; however, Lowry’s work reveals the other side: its tedium and psychological strain. He was not the only one to observe it. ‘I have seen hell and it's white,’ Mrs Gaskell said about Cottonopolis – the nickname for Manchester. And Dickens said of the same city, ‘The piston of a steam engine worked monotonously up and down like the head of an elephant in melancholy madness.’

Lowry was famous for his style of depicting human figures as ‘matchstick men’. His technique gives the figures a static quality, even when they are portrayed in movement, which has been a point of contention among art critics. However, Lowry was painting at a time when manufacturing thrived, and most people were employed in repetitive jobs – usually serving a machine. Such monotonous work causes rigidity and the human body seizes up in certain positions. As a result, Lowry’s figures arguably bear a static quality in order to reflect what happens to humans (both physically and psychologically) when they are reduced to a means of production.

In this painting, the cranes and ships have a striking presence. We do not, however, see anyone working on them. Lowry rarely painted people at work. Instead, he captured moments at the beginning and the end of the day when people were in transit – going to the pubs (which he rarely visited) or to their families (which he didn’t have). His works capture his sense of isolation. In Lowry: A Visionary Artist, the art historian Michael Howard writes that, for Lowry, painting was ‘an attempt to control that thing which he so feared: the mass of other people, particularly women; life itself'.

This painting was acquired by the Riverside Museum in 2005 with support from the Art Fund.

Lowry was an illusive and mischievous character who relished stories irrespective of their truth. The portraits of Ann form one of Lowry’s most mysterious series of works. His stories of Ann have been inconsistent and it is likely that she was Lowry’s fictional, idealised woman. In his seventies, in a rare and sincere moment, Lowry confessed to a friend: ‘I have never married; I have never had a girl, in fact.’ Instead of adult attachments, he befriended and nurtured young girls with ambitions to be artists. All had dark hair and dark eyes, just like Ann.