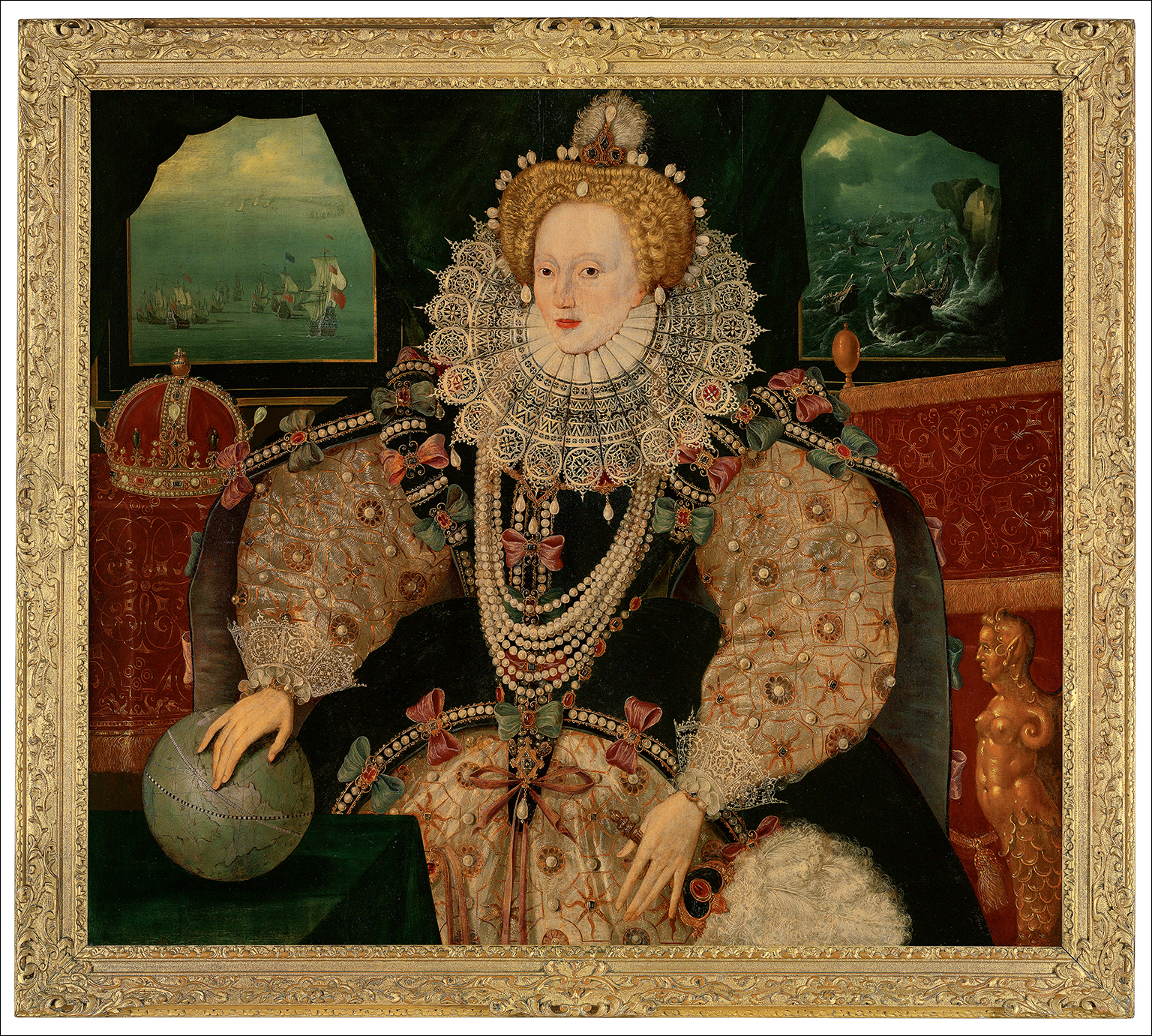 The Armada Portrait of Elizabeth I

In the words of the Elizabethan philosopher and polymath Sir Francis Bacon, Elizabeth I Â‘imagined that the people, who are much influenced by externals, would be diverted by the glitter of her jewels, from noticing the decay of her personal attractionsÂ’.

She was probably 55 by the time the Armada Portrait was painted to commemorate the defeat of the Spanish invasion fleet of 1588. Her bejewelled red hair and smooth, pale complexion give no clue to her age (nor the scars from the smallpox she had suffered at 29). Her upright posture, open arms and clear gaze all speak of vitality and strength, as does the crown to her right. The egg-shaped finial just above her left shoulder might even be seen to symbolise if not fertility, then rebirth and eternal life. But then, as Sir Walter Raleigh observed, she was Â‘a lady whom time has surprisedÂ’. ElizabethÂ’s lavish dress is, however, replete with meaning. Black and white (in this instance more of a grey) were her preferred colours for several reasons. White symbolised purity and virtue, and was expensive to maintain; black spoke of humility, but also authority and power, and required rare dyes. But those colours were also an allusion to Cynthia, the goddess of the moon (black for night, white for the pearl-like moon), the subject of RaleighÂ’s lengthy poem The OceanÂ’s Love to Cynthia, which celebrates the Queen as such a deity. Then there are the abundant pearls Â– visual metaphors for the moon in themselves Â– with which she is draped, also symbolic of her chastity. (Note that the largest baroque pearl, topped by a large pink bow, in the painting hangs on a level with her crotch, as blatant as a codpiece in a portrait of a man.) But pearls are not the only astronomical reference. On her skirt and her sleeves there are numerous suns to signify power and enlightenment, embroidered in gold. Look at her ruff and the lace on it, the shape of her hair, her headdress, her sleeves, her ostrich-feather fan, and it is tempting to suppose that the curves and arcs that describe them are intended to suggest the moon in orbit. She wears no jewellery on her hands Â– of which she was said to be proud Â– so as not to distract from the globe on which her fingers rest above the New World, a signal of her continuing potency as a ruler not just of England, but of America. (Raleigh had sponsored the first English colony on Roanoke Island, in what was then Virginia and is now North Carolina, three years earlier, and in 1587, the year before the portrait was probably painted, the first English child had been born there.) England was a seafaring power, hence the numerous marine references from the gilded mermaid or siren, reminiscent of a shipÂ’s figurehead, calling the Spanish sailors to their fate, to the ships in the background, direct references to the Armada. In the background of the seascape in the top left-hand corner, the painting shows the Armada itself forming a distinctive crescent shape as it travelled up the channel, while the English ships in the foreground. The ensuing storms and towering waves that later helped disperse them can be seen in the top right-hand corner, a scene of devastation on which the victorious monarch has, it seems, turned her back. The painting now hangs in the QueenÂ’s House, designed by Inigo Jones, 1616-1635, close to the site of Greenwich Palace, where Elizabeth was born, and reopened in October following a major restoration.

Possibly commissioned or acquired by Sir Francis Drake; recorded in family records in 1775; by descent to William Tyrwhitt-Drake Esq.