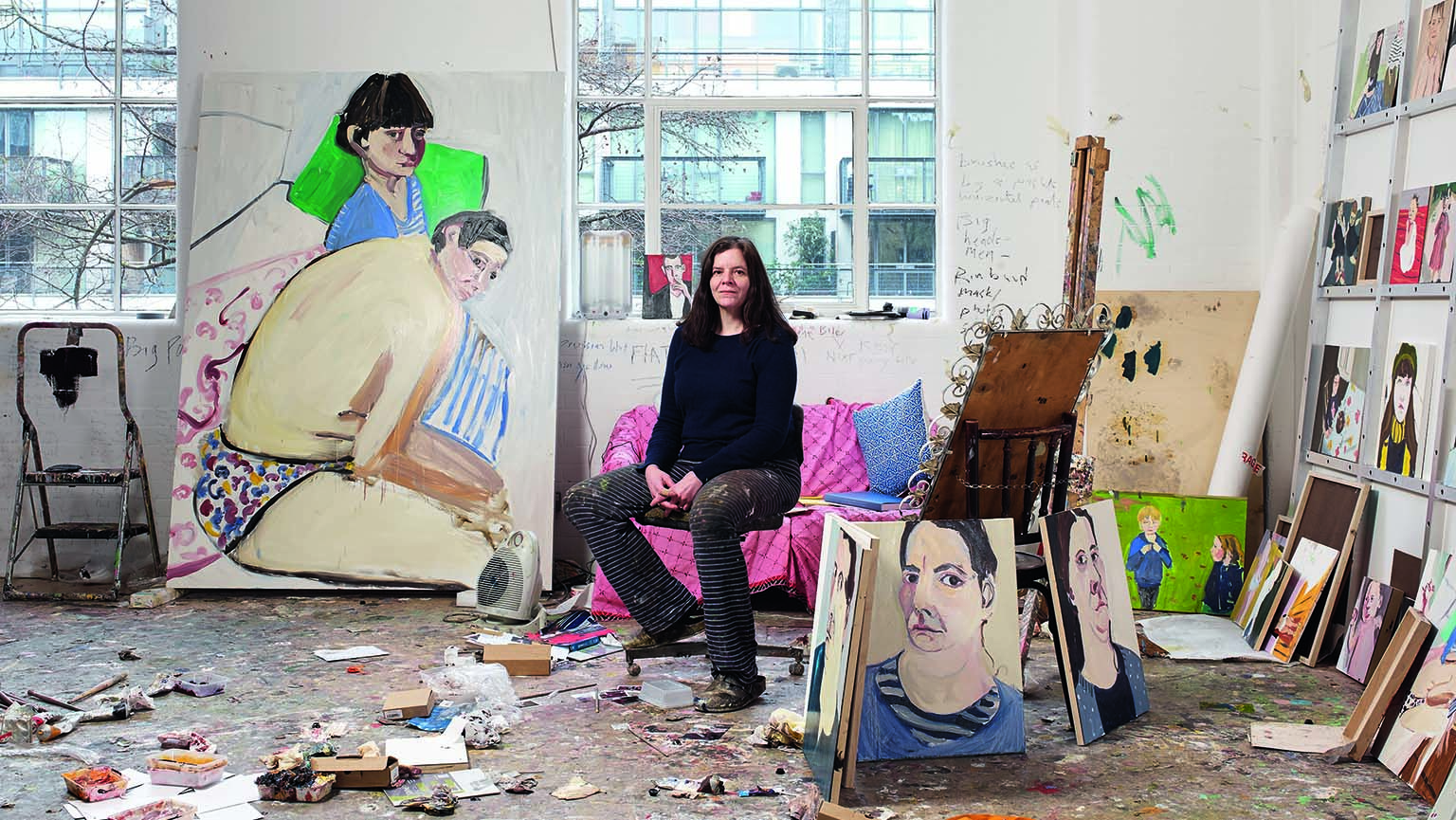 A version of this article first appeared in the spring 2018 issue of Art Quarterly, the magazine of Art Fund. 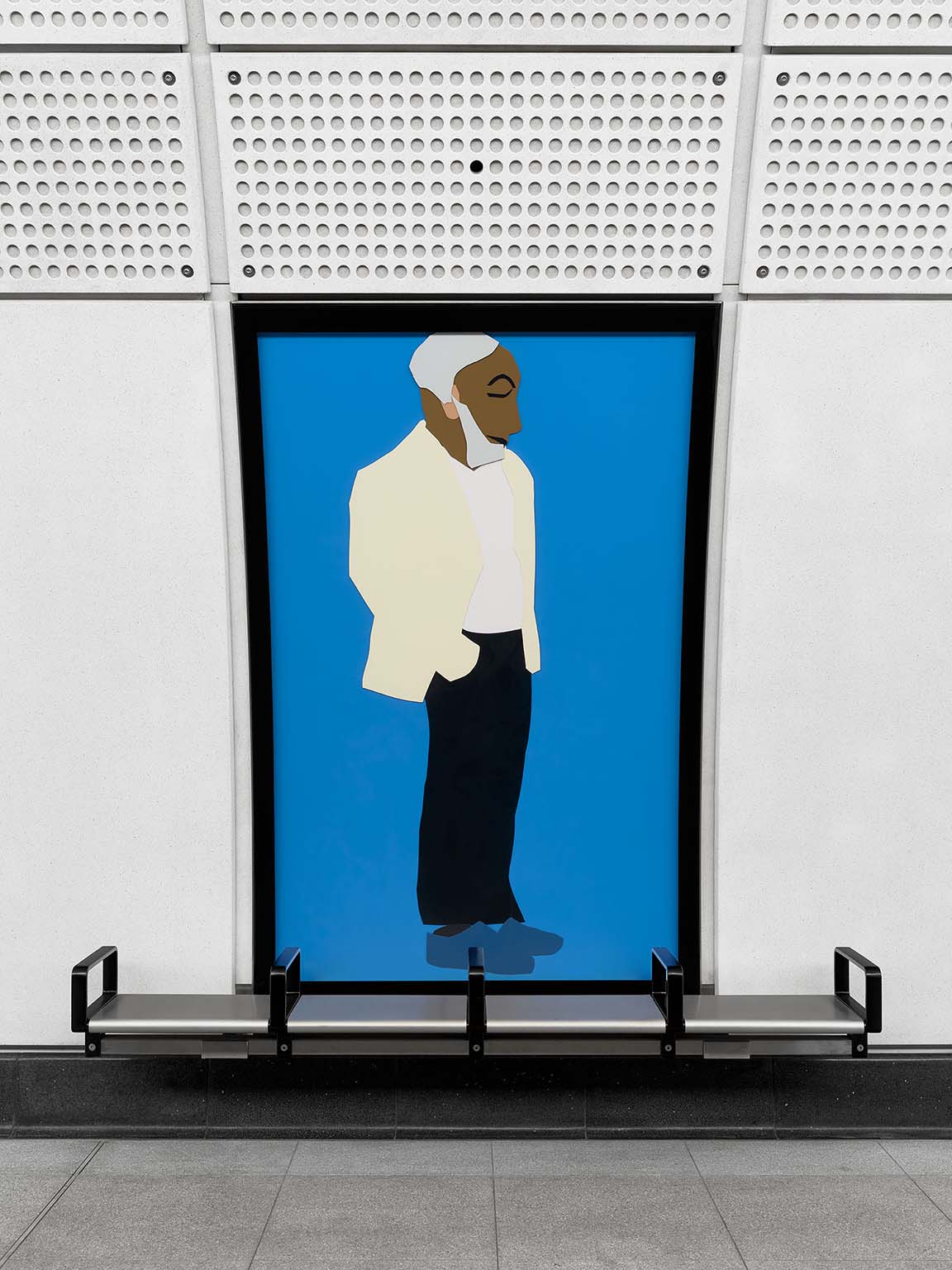 When London’s Elizabeth railway line opens in December, travellers passing through the platforms at Whitechapel station will be sharing the space with a series of 20 collaged images of larger-than-life Whitechapel residents, a typical mix of people who might be seen out on the street on a summer’s day – young and old, male and female and from diverse ethnic and cultural backgrounds; a youthful woman in a green dress combing her long brown hair; a mother in a headscarf, viewed from behind, reaching down to take the hand of her small son; a smartly dressed older man with white hair and beard standing, in side profile, with hands in pockets. Once in position, on the arching walls behind the seating on the two station platforms, these striking figures, each two metres high and rendered in coloured, powder-coated aluminium, will become this station’s permanent residents. Produced with support from Art Fund and titled A Sunday Afternoon in Whitechapel, they are the work of painter Chantal Joffe, one of a series of artist commissions for the new Elizabeth line stations as part of the Crossrail Art Programme.

Since graduating from the Royal College of Art in 1994, Joffe has gained an international reputation for her intimate and expressive figure and portrait paintings. Often using photographs as her source material, her subjects – predominantly female – can be individuals or groups, often her own family and friends, including herself and her daughter (with partner and fellow artist Dan Coombs). They might also be of people she has never met but whom she admires or feels a connection with, such as a long-dead poet or artist. But no matter who Joffe’s subjects are, it’s her ability to capture an everyday mood, manner or gesture, or the dynamic between two individuals, whether tender or awkward, that makes them all feel equally human and equally alive.

When I visit Joffe at the beginning of January in her large open studio in London, just north of Old Street, the aluminium elements that will form the figures for A Sunday Afternoon are being made off-site, waiting for Joffe to then hand-assemble them before installation. The original small paper collages on which they are based, however, and the table full of offcuts of paper and other research materials that went into the making of them, are still very much in evidence, as is Joffe’s enthusiasm for the project. She has worked with collage before, but this will be her first piece of public art. 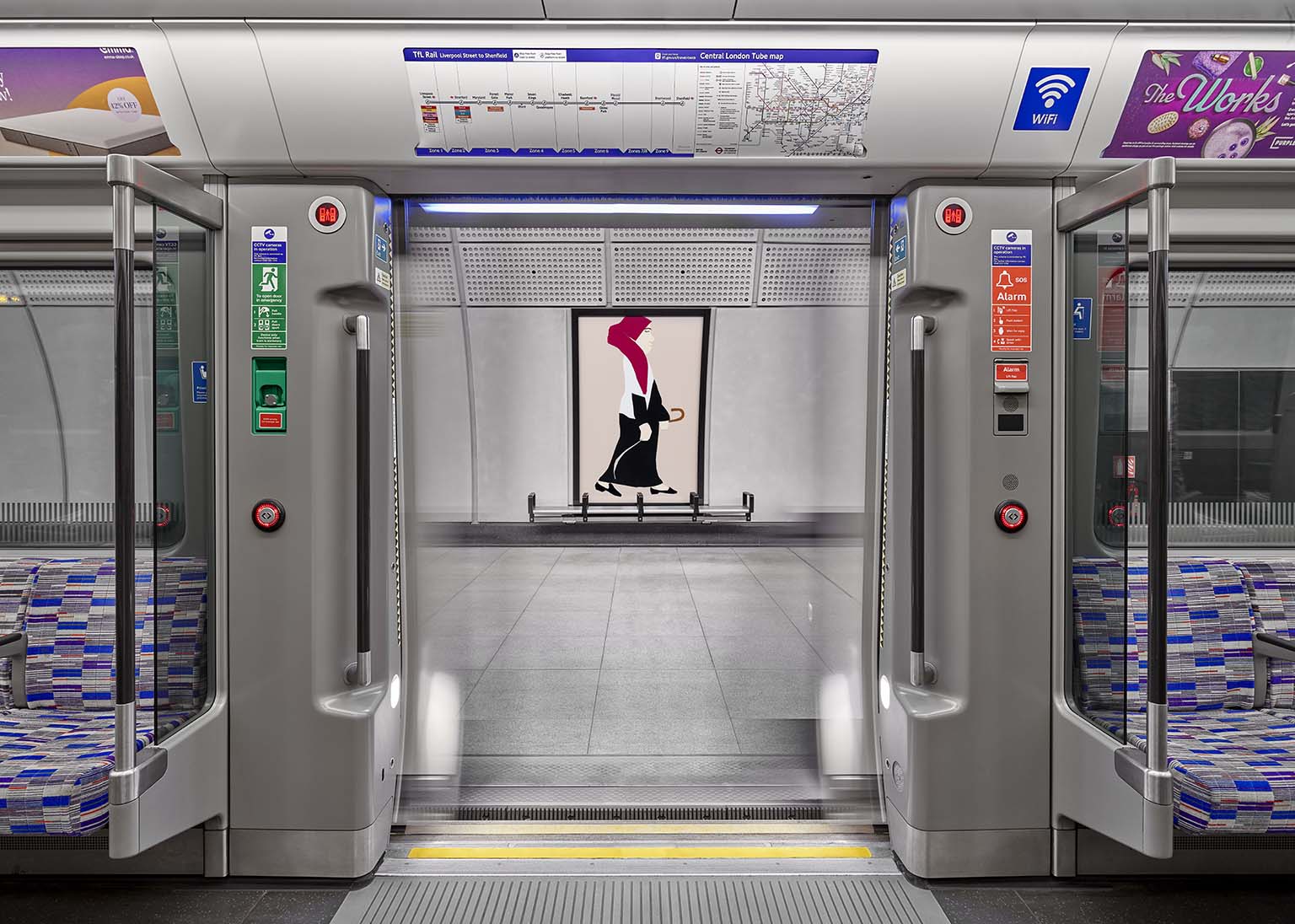 ‘I spent a lot of time in the British Museum and got very obsessed with different ideas about what public art could be, such as statues of Buddhas and sphinxes, and guardian figures that might have protected ancient citadel gates,’ she says, showing me a series of photocopied images. ‘But I was also thinking a lot about just travelling regularly on tubes and buses where you get to recognise people, even though you don’t actually know them. The area around Whitechapel station has its own identity and I spent a lot of time watching and thinking about the people who lived and worked and hung out there. It seemed to me that if the project didn’t convey that, it didn’t convey anything, which is how I came to this cross-section of people.’ Joffe’s process – from direct observation, to the creation of small collages deftly cut with scissors, free-form, from paper, to the scaling up of the collages in thin metal – has created abstracted figures who are not specific people, yet are very much like those people you might regularly see and think about, and so to Joffe they are still ‘portraits’. The original idea of the ‘guardian’ figure is still present too. ‘I like the idea that because they are being made to fit arched walls they will gently curve over people, in an almost protective way.’

Other references to which the artist was drawn back, and around which she read widely in her initial research, include the small, hand-painted, cutout collages made by the American artist Alex Katz in the 1950s – ‘I’ve loved those since I was a student; they’re wonderful, so simple’, Joffe says – and the work of the great mid-20th-century American street photographers, including Diane Arbus, Walker Evans and Garry Winogrand. Another inspiration was the glass mosaic mural installations of dancers and acrobats by Nancy Spero that adorn the 66th Street-Lincoln Center Station on the New York subway, and the mosaics by Eduardo Paolozzi at Tottenham Court Road tube. Completed in 1986 they are now synonymous with the station. ‘The idea of creating a permanent piece of public art is quite daunting,’ Joffe confesses. ‘But what I hope is that in the same way that Tottenham Court Road is the place where “the mosaics” are, whether people like them or not, they will come to identify Whitechapel as the place where “the people” are.’ 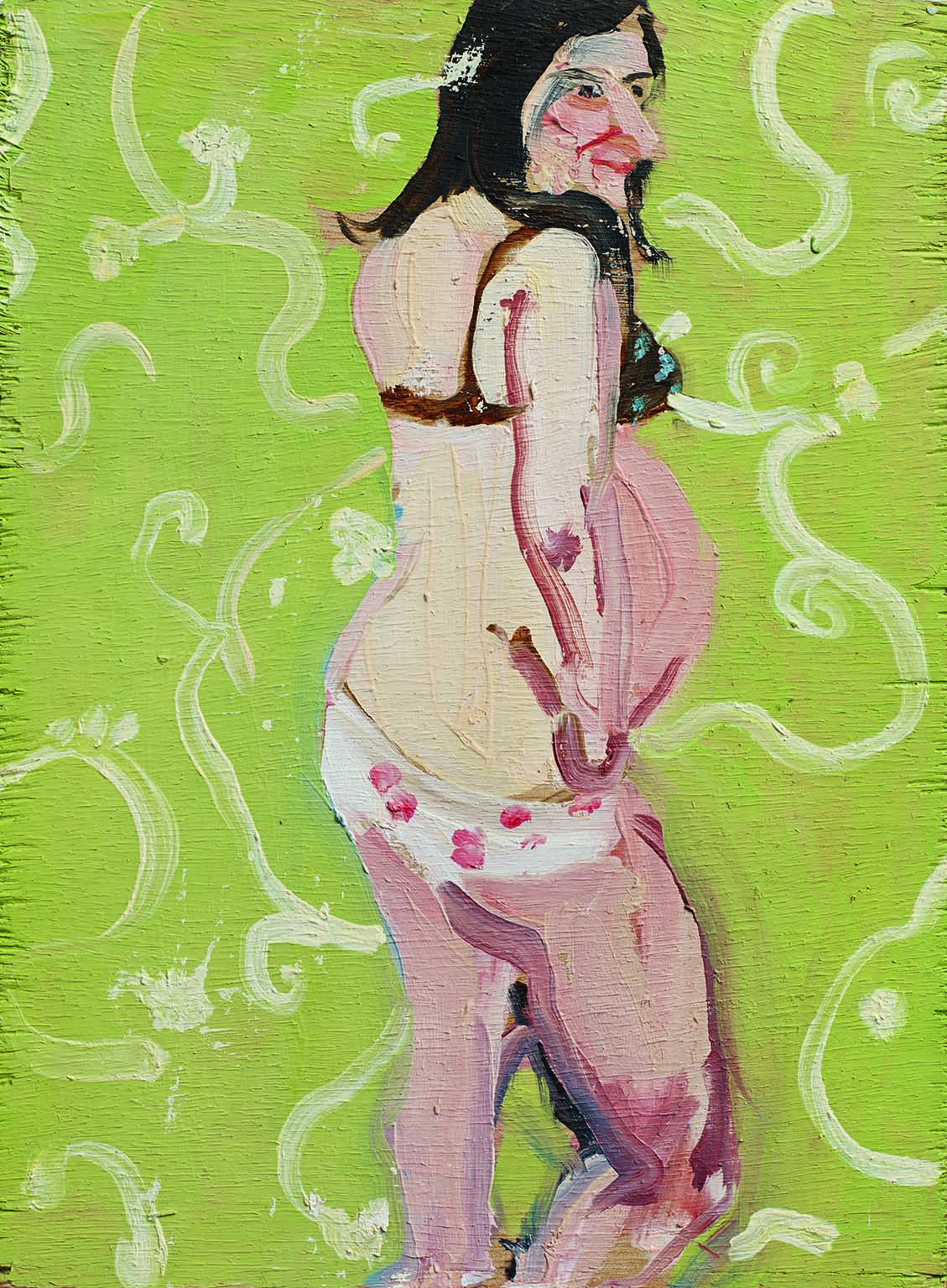 Whereas travellers will have to wait until the end of the year for the unveiling of A Sunday Afternoon in Whitechapel, maquettes and preparatory work for this and all the other commissions for the line can be seen in a display at the Whitechapel Gallery, opening on 13 March, when the full list of nine artists will be revealed.

Another project in progress, with which Joffe is equally engaged, is an exhibition opening in May, focused on the early German Expressionist painter Paula Modersohn-Becker, which the Lowry in Salford has invited her to stage as part of its ‘Week 53: The Coming of Age’ festival, a celebration of the venue’s 18th anniversary. Joffe has a longstanding interest in the life and work of Modersohn-Becker – possibly the first artist to paint herself naked, and while looking pregnant – something which Joffe has also done. Though Modersohn-Becker’s career was short, her output, predominantly portraits of women and children, was prolific.

Born in 1876, Modersohn-Becker had a life and career illustrative of the difficulties women artists have faced in pursuing their creativity and a domestic life. In late-19th-century Germany, through her own determination, she found a way to combine being both an artist and a wife, but not happily. She left her husband, fellow artist Otto Modersohn, in 1906, but it was her desire to have a child that reunited her with him the following year. After giving birth to their daughter in 1907, aged 31, Modersohn-Becker complained of leg pain, for which her physician ordered her to remain in bed. When he allowed her up, 18 days later, she walked a few steps, sat down and died, the result of an embolism caused by lying down for so long.

‘I’ve written about Paula and painted her quite a lot because I love her work so much, so the idea for the exhibition was immediately attractive to me,’ Joffe explains. ‘She’s the ultimate painter trying to decide whether to have a child, and accompanied by this is a terrible sense of punishment.’

Joffe’s Lowry exhibition will include works by Modersohn-Becker, alongside paintings by Joffe herself, including one of three versions of a large-scale self-portrait with her daughter, titled The Squid and the Whale. Having never been afraid of fleshy reality, especially her own, Joffe depicts herself sitting on a bed, hunched over, dressed only in underwear, an expanse of creamy back and thigh on display, with her daughter Esme, now a young teenager, sitting behind her. ‘I wanted my head as small as possible, like an ant or little black bug, with this massive white fleshy back, which is protecting Esme, but also from which she is emerging, fully dressed, at an age where she may have the desire to also be protective of me.’ 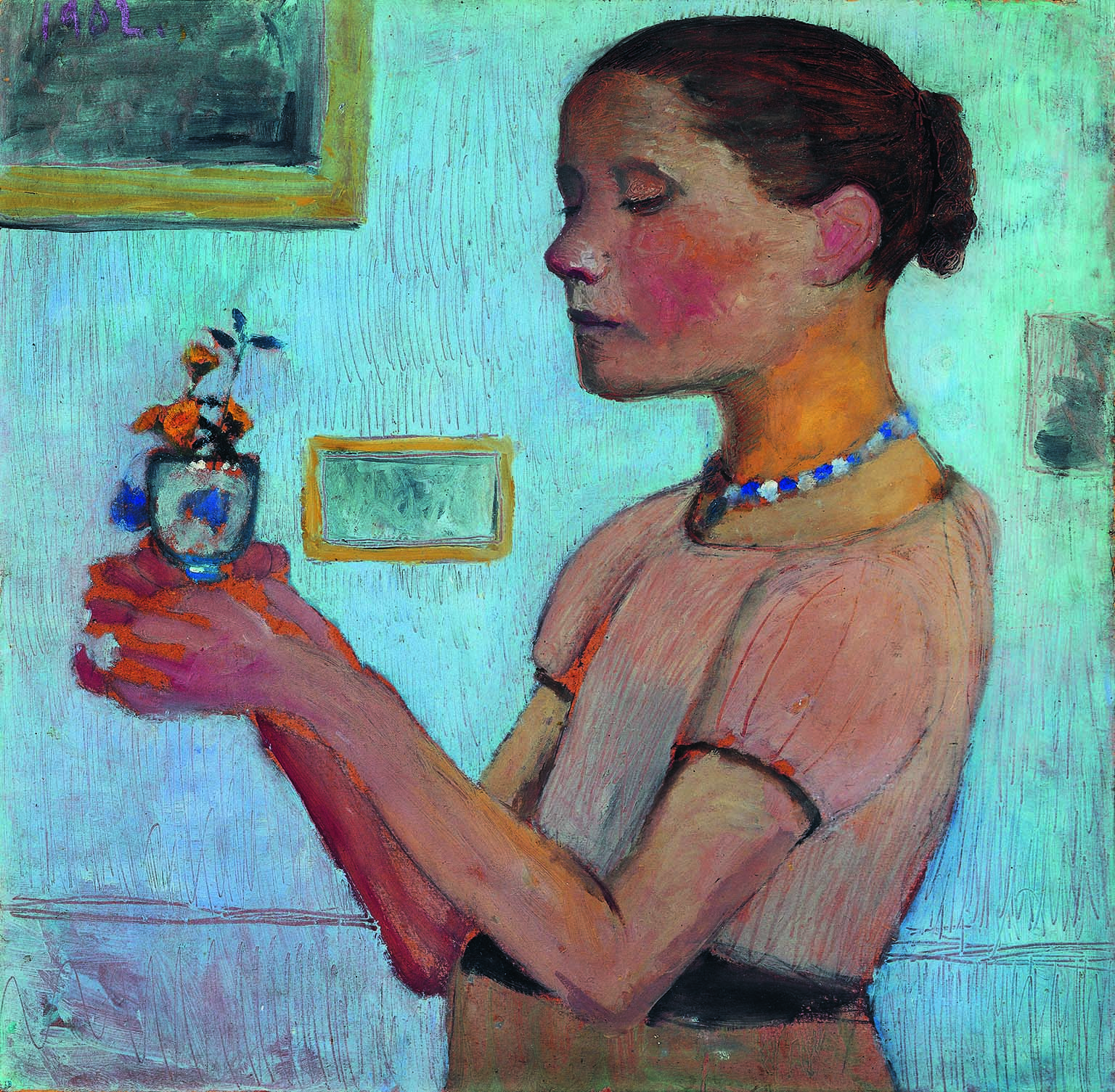 Joffe is undertaking much of the negotiation to obtain the Modersohn-Becker loans for the exhibition herself. This has included a trip made with her friend, and Modersohn-Becker expert, Dorothy Price, accompanied by both of their daughters, to Modersohn-Becker’s former house in Worpswede, near Bremen, in northern Germany. An artists’ colony when Modersohn-Becker lived there, it is now converted into four museums. It is this level of engagement with her subjects, either in person or through their biography, that’s vital to Joffe’s painting process. ‘In order to paint them, I have to find a way into imagining them,’ she says.

The only nerves Joffe has for this project are about showing her work alongside Modersohn-Becker’s. ‘I’m always a bit wary of a seeming comparison with a great artist from history, but because she’s still not that widely known it will also be about spreading the word, which feels a bit more OK.’

At the time of writing, Joffe’s Lowry exhibition has the working title of ‘Personal Feeling is the Main Thing’, which seems appropriate to both artists’ work. The title of French writer Marie Darrieussecq’s recently translated biography of Modersohn-Becker, Being Here is Everything (also published as Being Here], is a phrase that also resonates with Joffe. ‘I love that phrase because that’s really what Paula was about, and it’s also what I feel like being a painter is about for me. It’s about the moment.’

A version of this article first appeared in the spring 2018 issue of Art Quarterly, the magazine of Art Fund.

The Elizabeth line opened on 24 May 2022, with 10 new London stations between Paddington and Abbey Wood, including Whitechapel station.