From Sam Taylor-Johnson's rotting fruit to Bosch's visions of Hell, here are some of the incredible artists who inspired Alexander McQueen 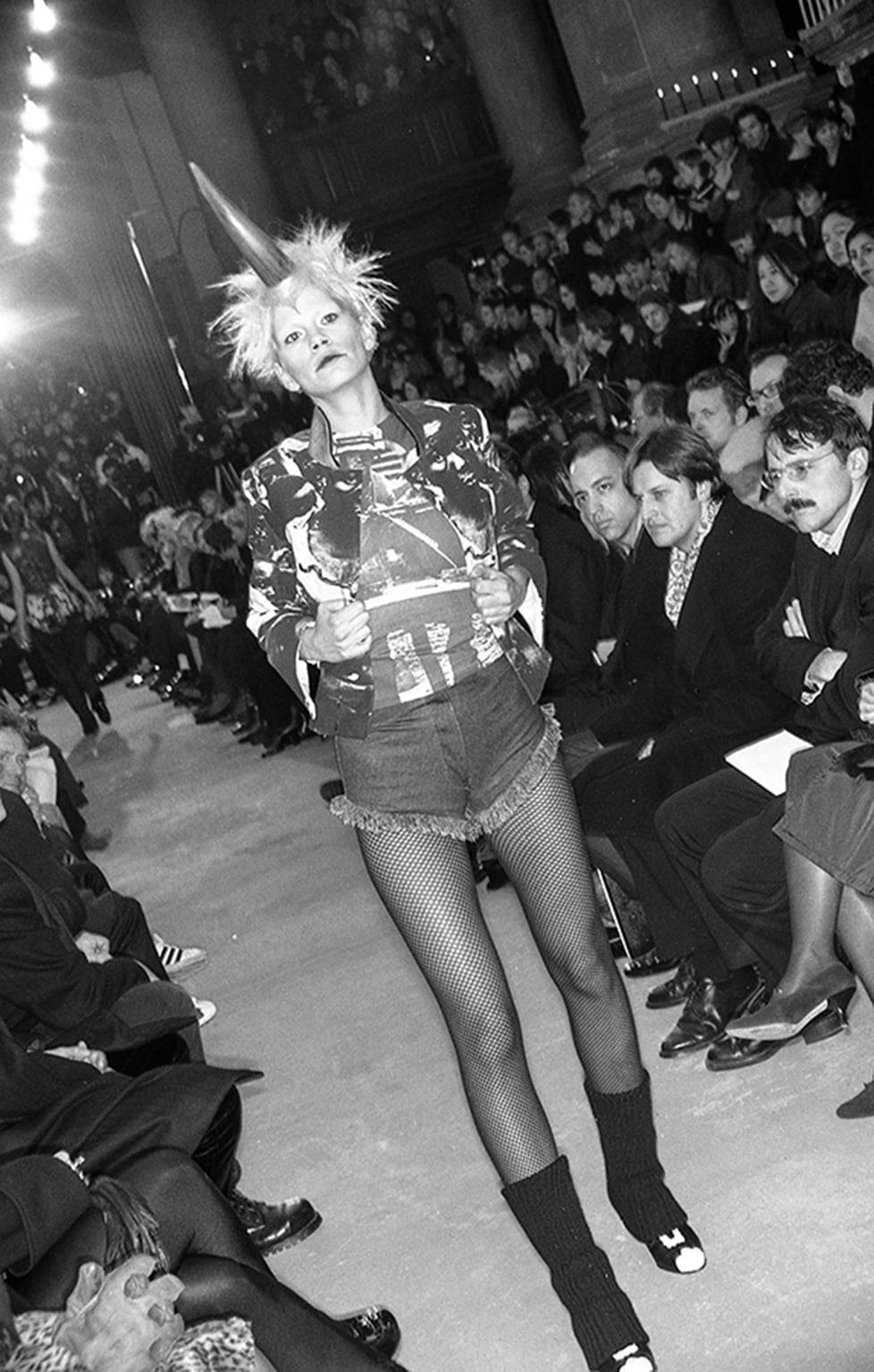 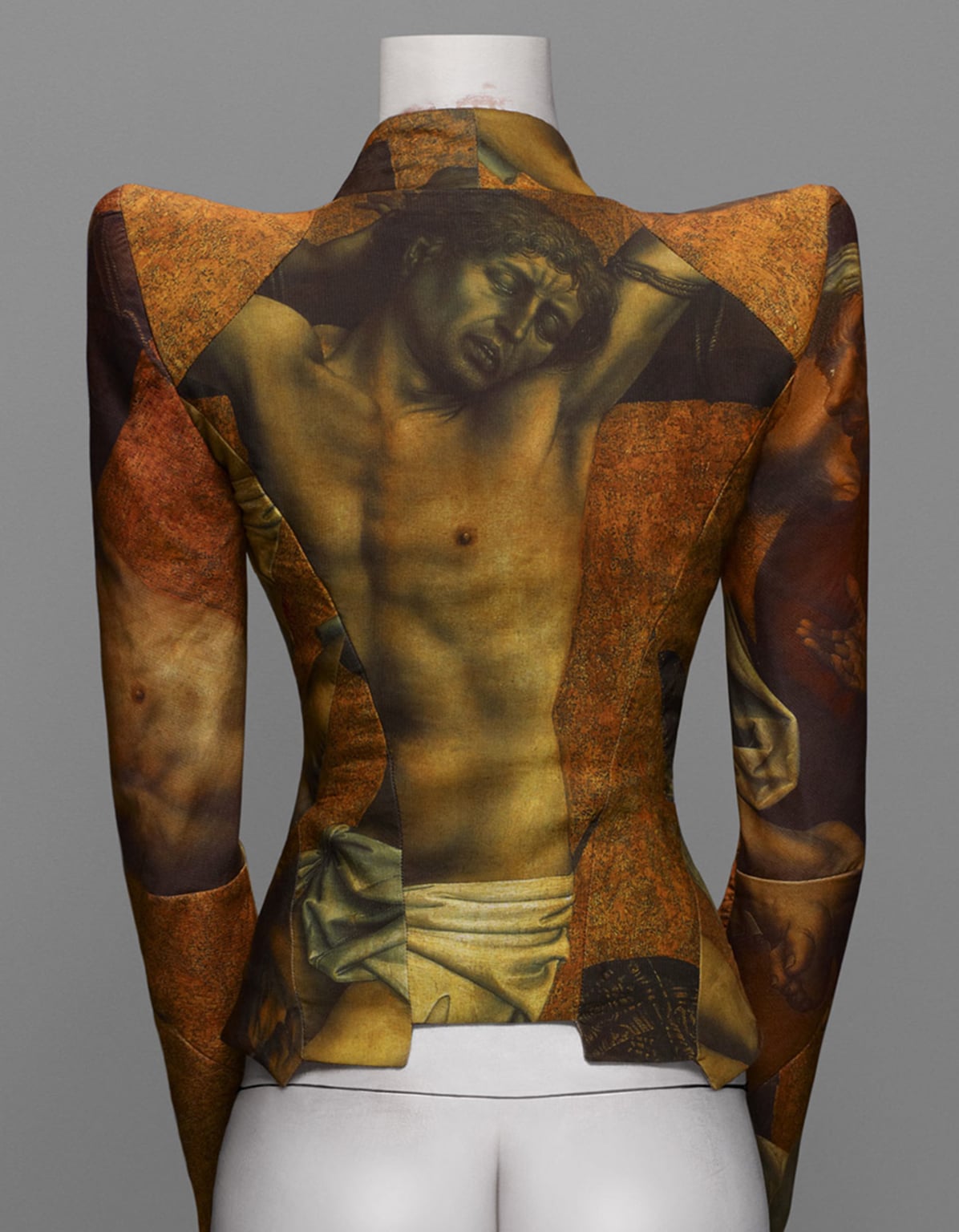 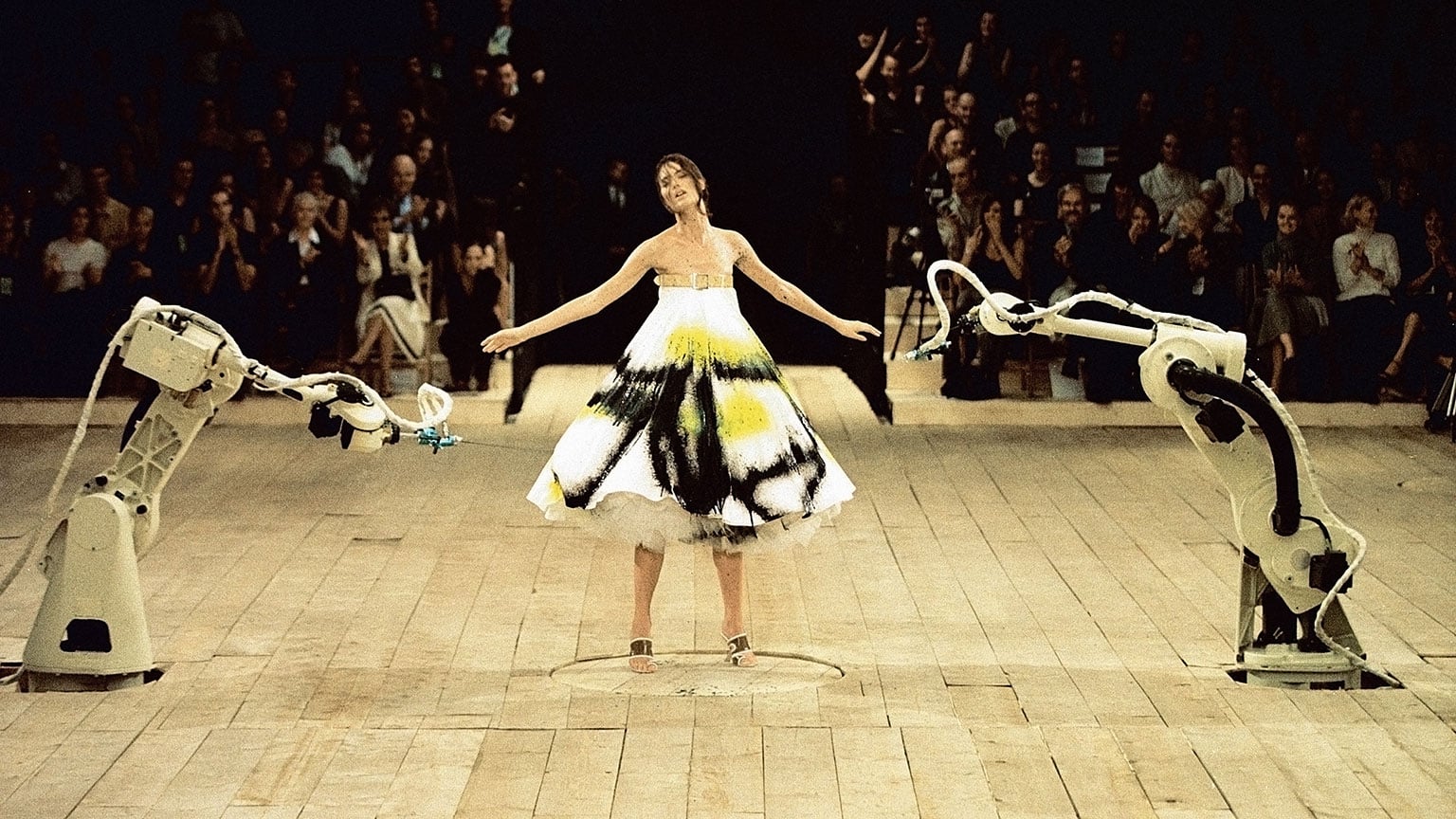 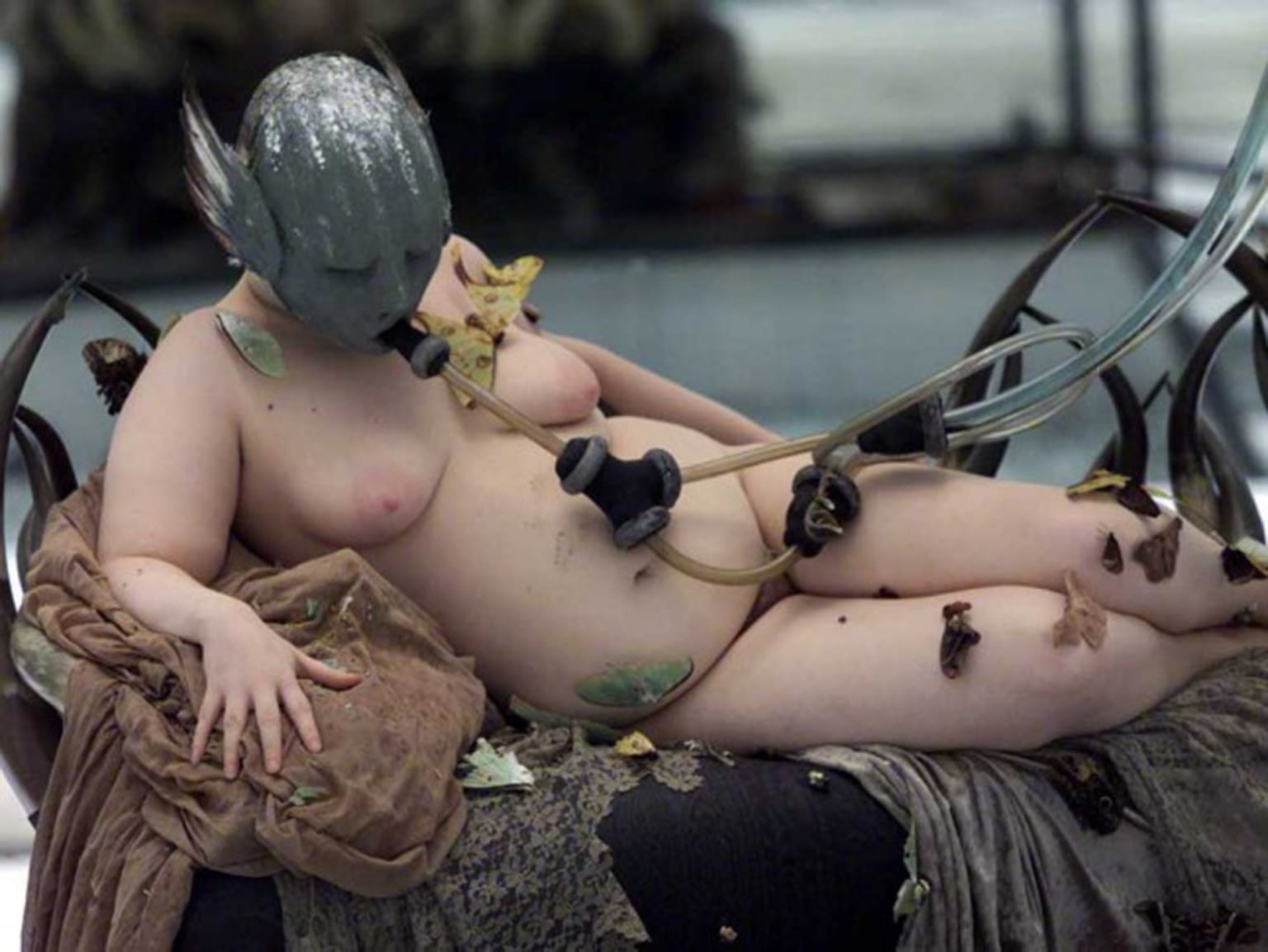 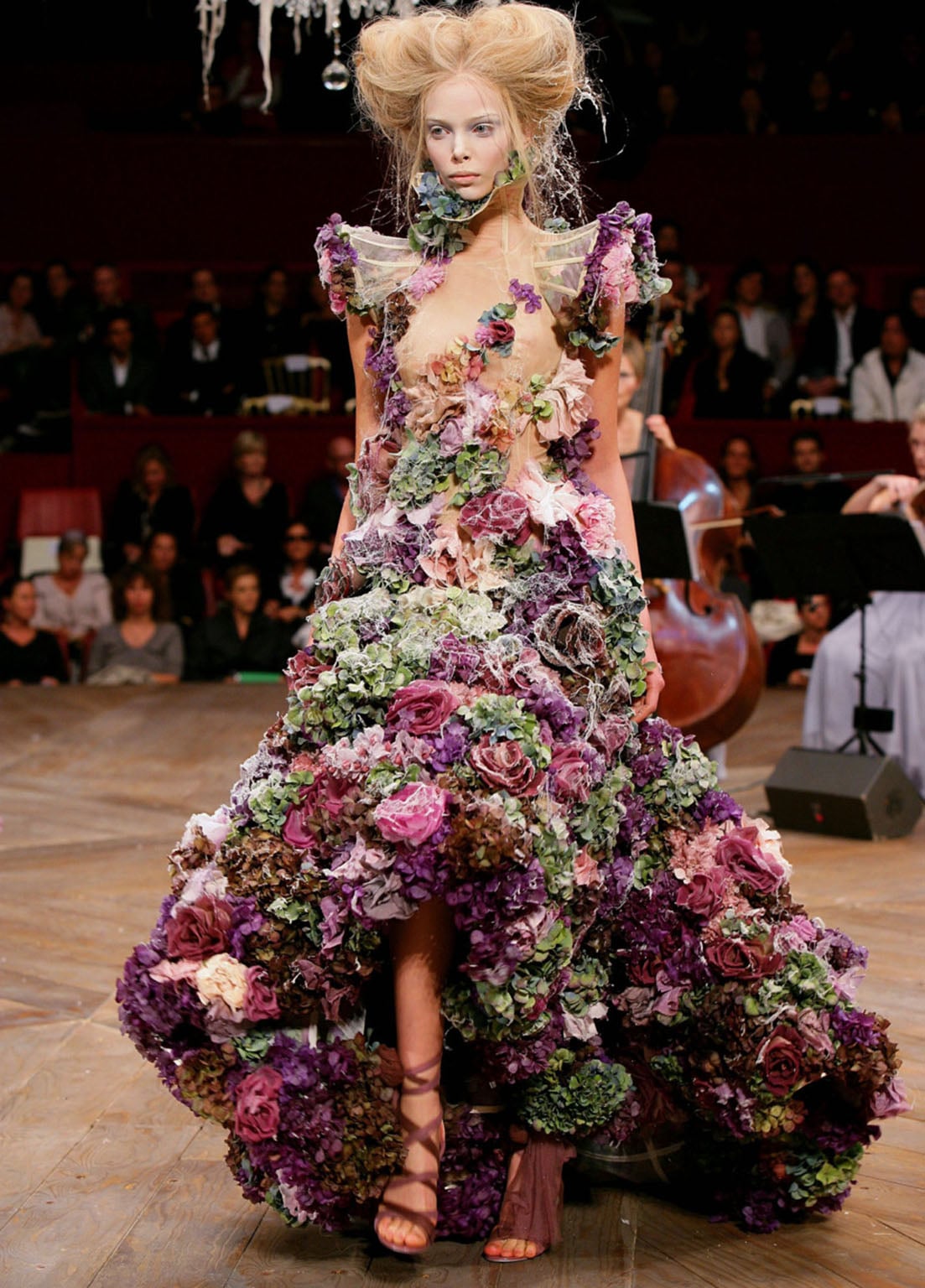 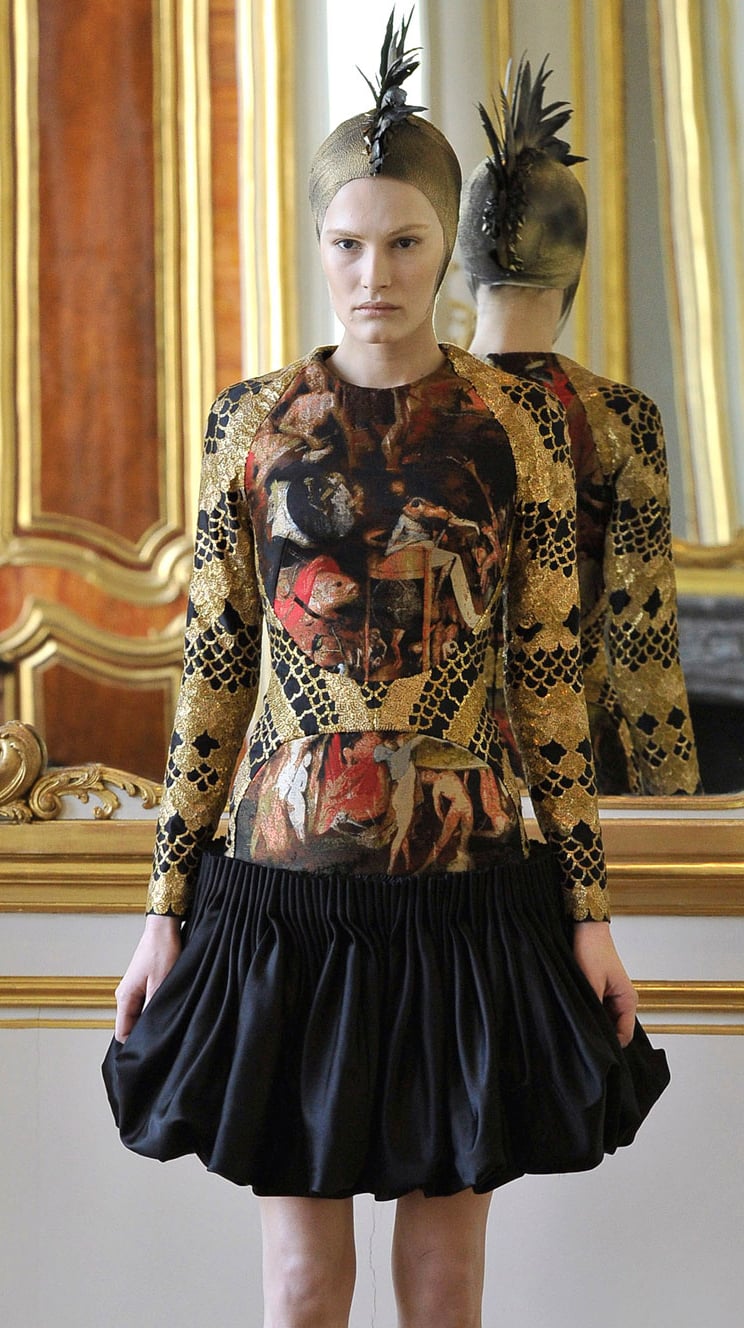 In 1996 McQueen staged his controversial show Dante in Christ Church Spitalfields. His collection included nods to the Victorian era, religious iconography worn as jewellery, and several pieces comprised of images taken by Don McCullin. The world renowned war photographer refused to grant permission for his work to be reproduced, but McQueen went ahead anyway.

The 1997 collection It's A Jungle Out There featured all imaginable form of exotic wildlife, from gazelle antlers to taxidermy crocodile heads. A more unexpected addition was the 15th century religious painting The Thief to the Left of Christ by Robert Campin. This dramatic image of crucifixion was collaged and re-stitched into a jacket.

The incredible finale of No.13 saw model Shalom Harlow in a white tulle dress revolving on a moving platform, while two robots sprayed her with black and yellow car paint. This extraordinary performance was inspired by a Rebecca Horn 'machine' installation, in which two shotguns fired blood-red paint at each other.

This subversive American photographer specialises in re-examining classical tropes, often utilising marginalised ‘outcasts’ and even corpses as subjects. Sanitarium features a reclining, curvaceous nude wearing a gas mask, and was recreated by McQueen for his VOSS show. The striking live version was sealed in a giant box as models stalked the runway feigning signs of insanity and terror. The finale saw the walls smash to the ground to reveal the scene – complete with hundreds of moths.

Before 50 Shades of Grey Taylor-Johnson made melancholic videos that examined the beauty of death and the macabre. McQueen was particularly taken with her piece Still Life, which witnesses a bowl of fruit slowly decomposing. For Sarabande he created dresses made from real flowers, so that they would rot and decay: 'I used flowers because they die, my mood was darkly romantic at the time'.

As one of the world's most prolific graphic artists, Escher created optical illusions based on mathematic principals in his woodcuts and lithographs. McQueen adapted several of his patterns, such as Sky and Water I and Liberation, in order to create houndstooth designs that morphed into flocks of birds. The melodramatic, voluminous creations seen in A Twisted Fantasy complemented these contemporary motifs to create exaggerated, mind-bending silhouettes.

The post-humous collection Angels and Demons featured opulent luxury with vintage brocades and heavy embellishment, as well as nods to medieval shapes and styles. Once again McQueen looked to original works of art from the likes of Bosch, including glimpses of The Temptation of St Anthony and The Garden of Earthly Delights. These nightmarish depictions of Good and Evil, Heaven and Hell, and tortured souls would appear to reflect his internal conflict at the time of his suicide.

Alexander McQueen: Savage Beauty is at the V&A from 14 March until 2 August 2015 and is 50% off with National Art Pass.