Ruth Asawa folded all experiences – from family to a love of natural forms and a belief in the power of art education – into her unique sculptural practice. Hettie Judah profiles her life and work. 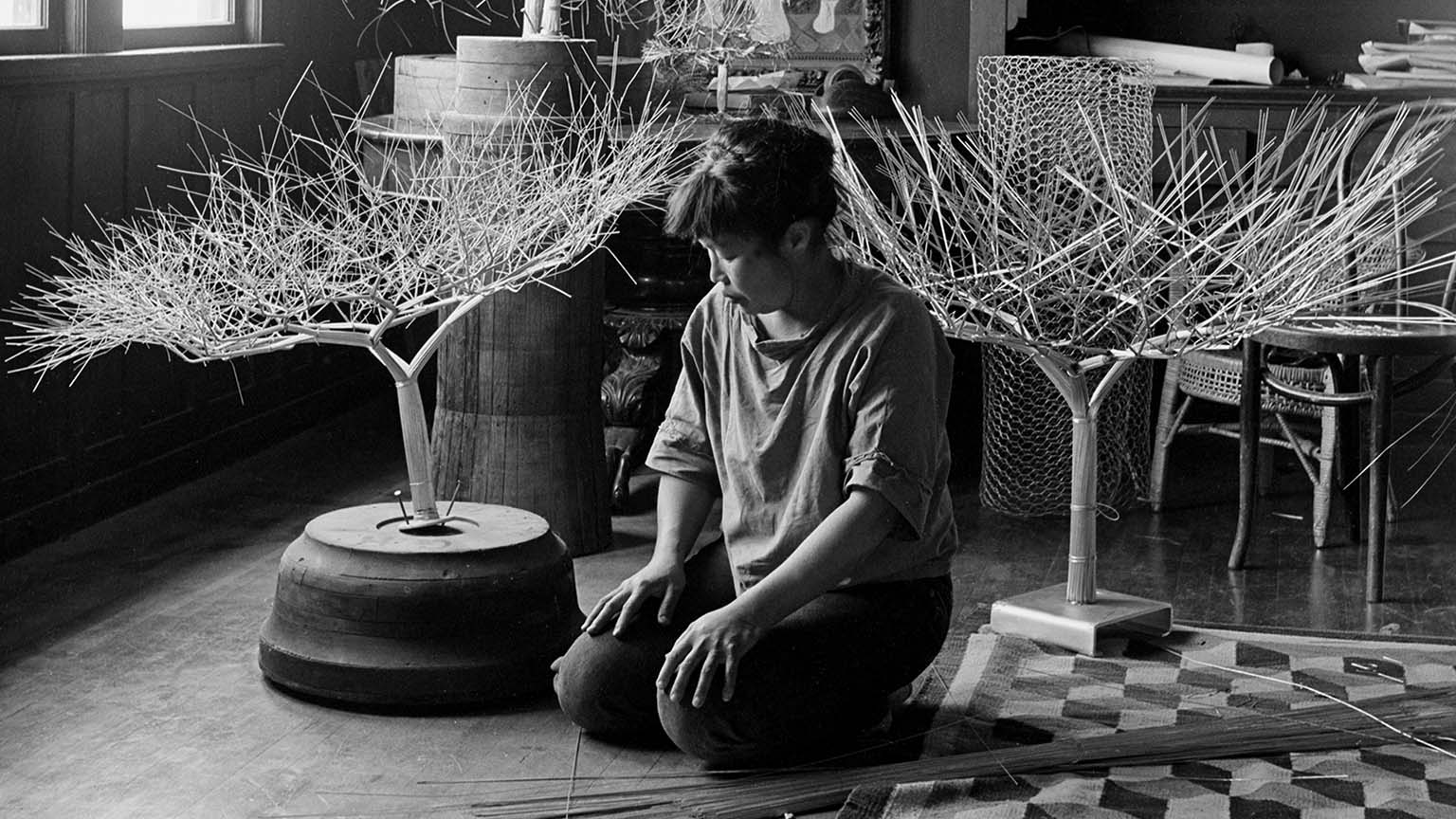 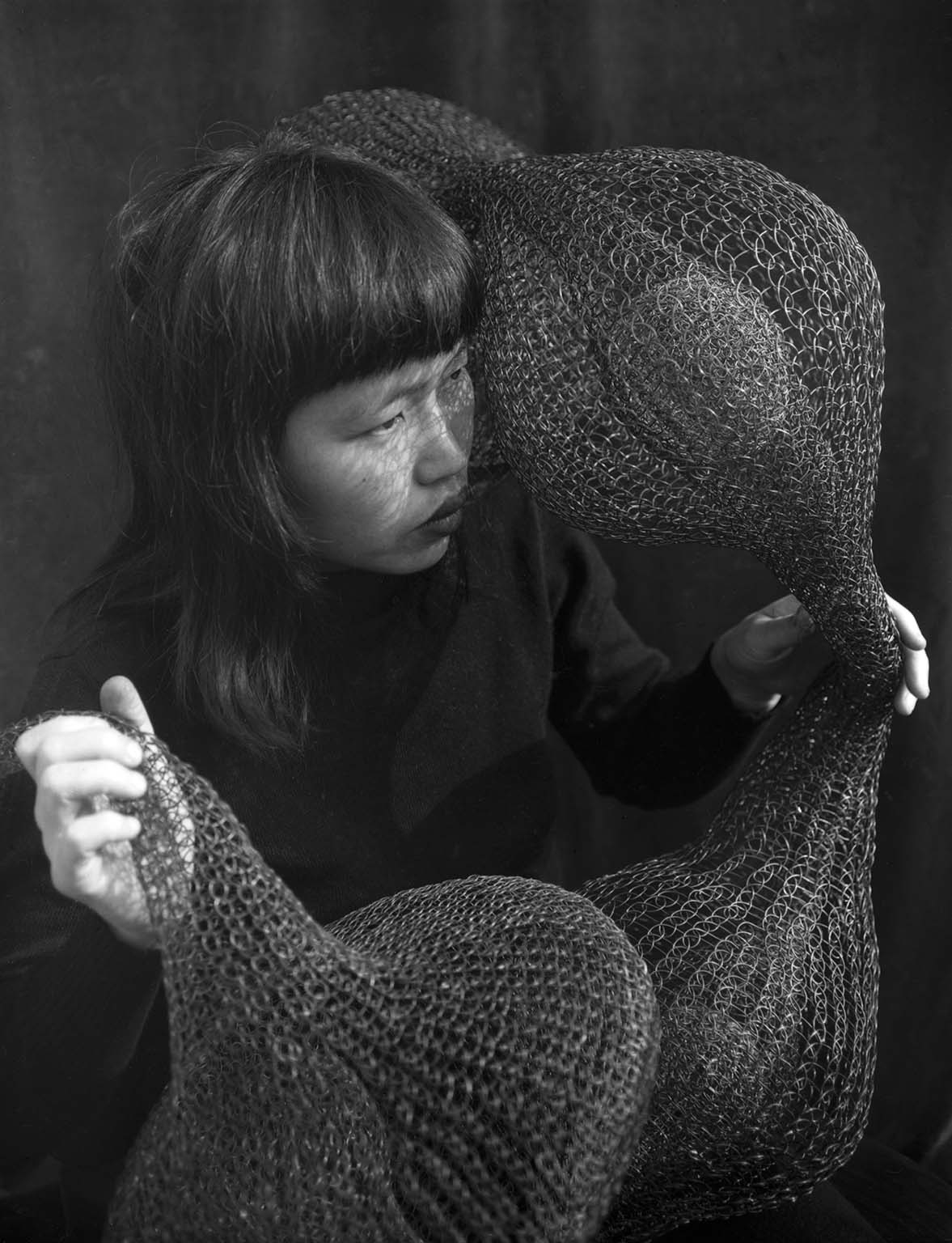 ‘Every minute that we’re attached to the earth we should be doing something,’ Japanese-American artist Ruth Asawa (1926-2013) told a documentary filmmaker in 1978. The fourth of seven children, born to immigrant farmers in rural California, what Asawa was expected to do was work in the fields alongside her parents tending vegetable crops. The experience stayed with her. Asawa felt a profound connection to the natural world. When she described being attached to the earth, she pictured herself as though a seed or bulb: she could no more stop making, doing and seeing than a seedling plant could stop growing. For Asawa, all of life was creation, all of life was discovery: there was no division.

Asawa created sculptures that sing out her fascination with botanic form. Suspended from the ceiling, her lobed looped-wire forms evoke the curves of gourds and squashes; her open hyperbolic shapes suggest the ghostly remains of burst seedpods or hanging flower heads in full bloom. Their intricate construction itself echoes vegetative growth – each looped work is formed of a single wire, woven into a continuous flowing surface.

Tending her plants avidly as an adult in San Francisco, Asawa described the garden as a place of information gathering. She drew every day: often botanical studies. The tied-wire sculptures that she started to produce in the 1960s emerged directly from drawing practice. In 1962 a friend returned from the desert with a desiccated plant specimen for her to draw. Foxed by the tangled bush of dried branches, Asawa instead engaged with the plant’s structure by modelling it in wire: the result was a bundle of spokes that split into a nimbus of branches and twigs.

Modernist friends criticised Asawa’s early tied-wire sculptures as too representational – too tree-like – so she instead made mirrored forms, branching and dividing both down and up. Tied wires burst forth from thick central stems into circular constellations of fine lines, abstracting the geometries of trees and shrubs. As she later pointed out, these forms were in fact more truly representative of the pattern of natural growth, suggesting the unseen roots as well as the visible branches. 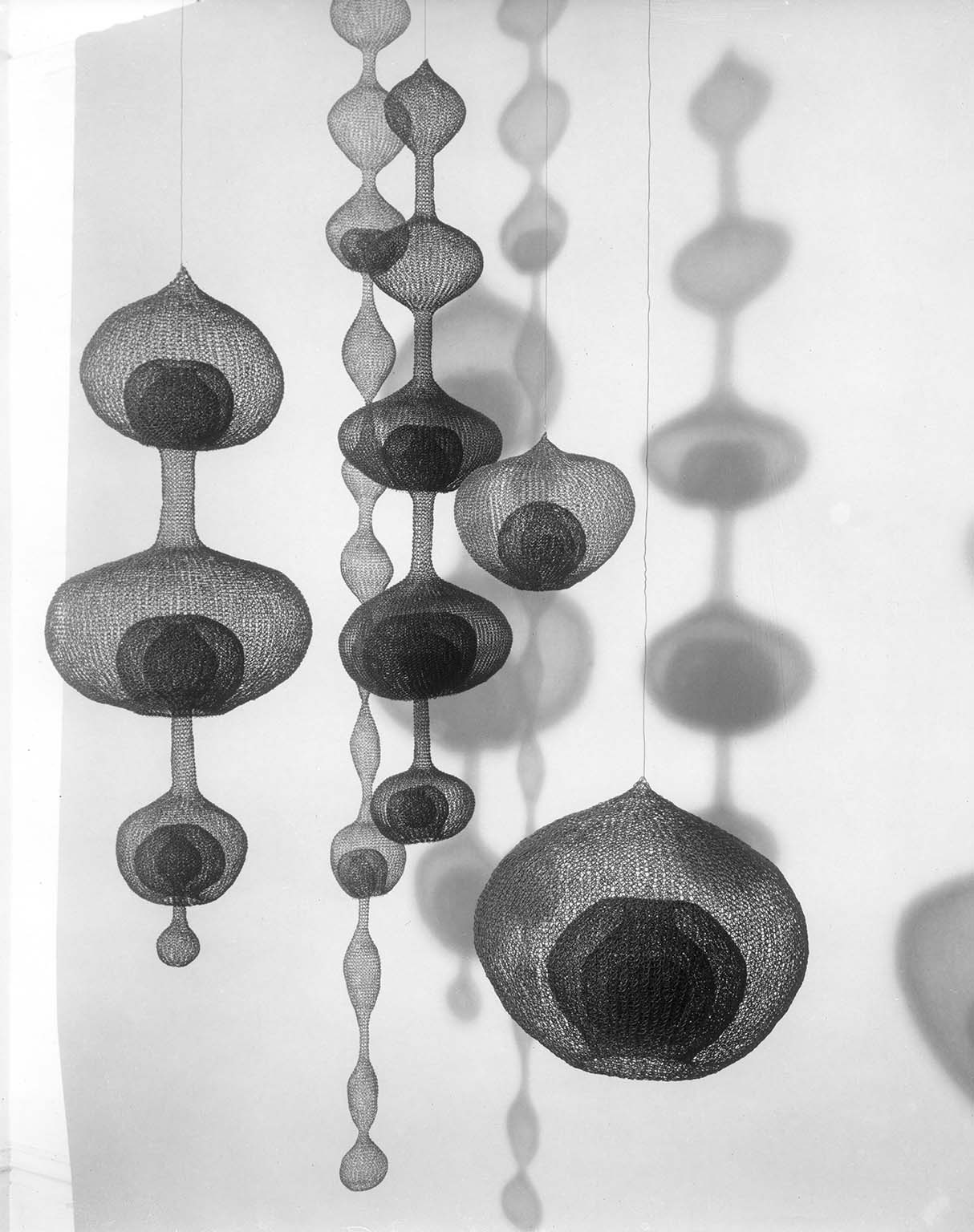 ‘Drawing was almost a religious practice for her,’ her daughter Addie Lanier has explained. ‘I think it came from her training with Josef Albers, whose core teaching focus seemed to be to teach people to see. She felt that by keeping her eye and her hand connected she was always going to be ready for the next opportunity.’ The route by which Asawa came to study with Josef Albers, a professor at the influential Bauhaus art school in Germany, was tough and convoluted. It was a journey that testifies to Asawa’s extraordinary sustaining spirit, curiosity and self-belief.

In December 1941, when Asawa was 15 years old, Japan launched an aerial attack on the US naval base at Pearl Harbor, leading to the formal entry of the US into the Second World War. In the following months, US citizens of Japanese origin were detained and deported: in February 1942, Asawa’s father was arrested and in April the rest of the family were placed in an internment camp at Santa Anita racetrack in Arcadia, California, where they lived for five months in the horse stalls. Later Asawa recalled the overpowering stench of their lodgings: ‘The smell of horse dung never left the place the entire time we were there.’

For a girl who had hitherto only held a calligraphy brush during Saturday Japanese classes, the internment camp threw up an unexpected encounter. Detained alongside her were a group of artists from the Walt Disney studios, who led classes for the camp’s children. Moved on to a second relocation centre in Arkansas, Asawa thereafter dedicated herself to painting and drawing. She graduated from high school in the camp and received a scholarship from a Quaker organisation to attend college in Milwaukee, Wisconsin. There she trained to become an art teacher, earning her bed and board as a live-in servant for the princely sum of $1 a week.

“At Black Mountain College, Asawa was permitted to be an individual rather than a person defined by race, gender or social class”

During the summer break, Asawa took on extra work at a tannery and saved for a bus ticket to Mexico where she studied the public art of Diego Rivera and José Orozco. Here she also took classes with the Cuban designer Clara Porset, who had studied with Josef and Anni Albers. Porset suggested that Asawa might consider studying at Black Mountain College – an experimental art school in North Carolina, structured around the egalitarian ideals and teaching methods of the Bauhaus.

Back in Milwaukee, Asawa found herself unable to graduate. No school would provide a student of Japanese parentage with a work-experience placement. Instead, in 1946, she made her way to North Carolina for a summer course that ended up lasting three years.

At Black Mountain College, perhaps for the first time, Asawa was permitted to be an individual rather than a person defined by race, gender or social class. Her ideas, skills and opinions were valued. College staff at the time included Josef Albers and the radical designer and thinker R Buckminster Fuller, both of whom interceded so that Asawa might remain at Black Mountain. The two men became lifelong friends and important champions of her art. 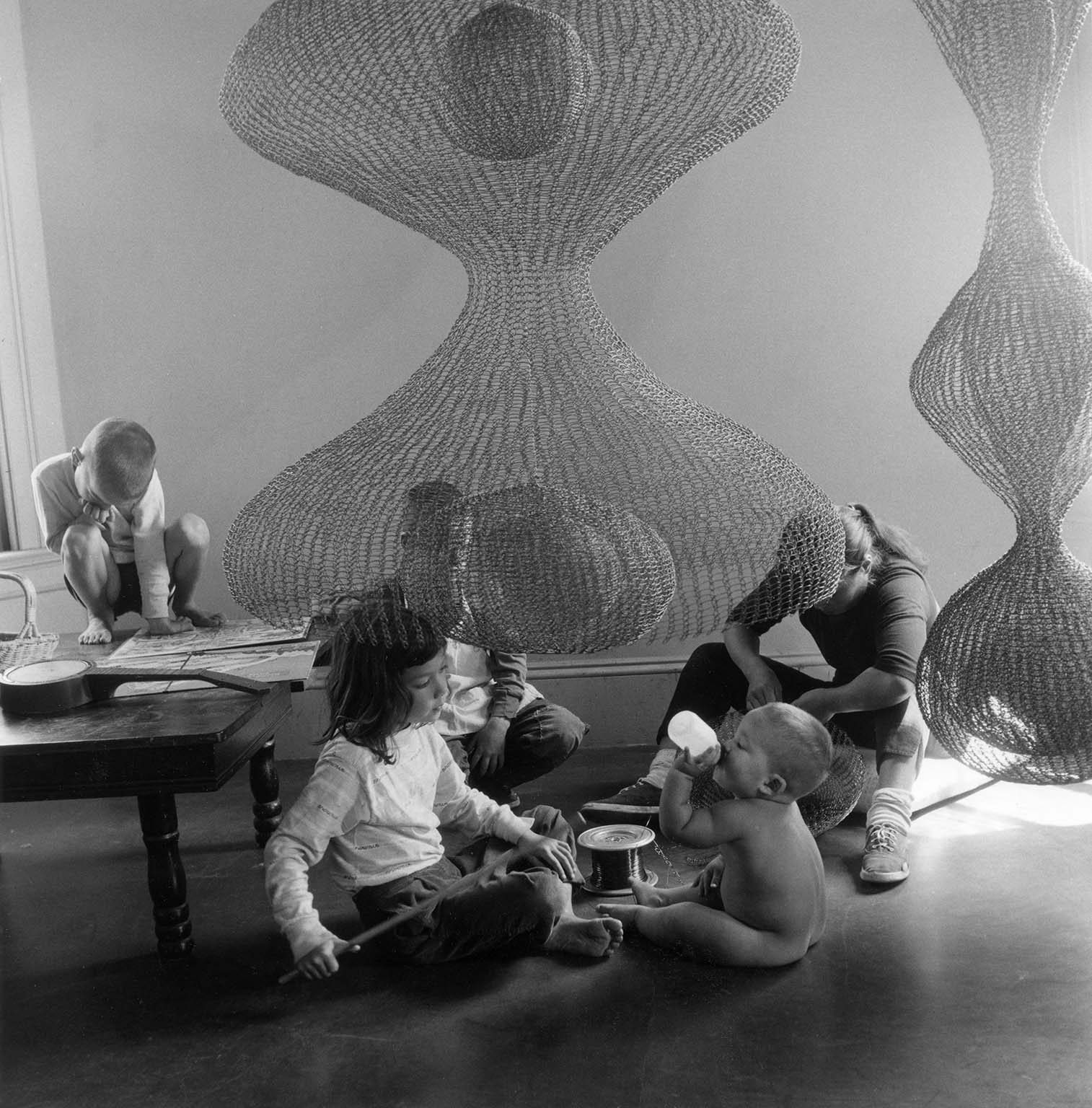 Proposing Asawa for a Guggenheim Fellowship some three decades later, in 1971, Buckminster Fuller wrote: ‘I state without hesitation or reserve, that I consider Ruth Asawa to be the most gifted, productive, and original artist that I have ever known personally. That statement includes many of this century’s most celebrated “greats”.’

At Black Mountain College, Asawa met a young architect, Albert Lanier: they married in 1949 and settled in San Francisco where they raised a large family and opened their doors to artists of all disciplines. Their home became studio and family space alike – their six children recall the suspended looped-wire works stuck through with paper airplanes and spare pencils.

Asawa never underestimated the pivotal role that arts education had played in her life, and dedicated years to ensuring all children might have access to such opportunities. Such is her impact on education in San Francisco that the School of the Arts now carries her name, and since 1982, the city has celebrated Ruth Asawa day on 12 February. Asawa saw a direct echo of her experience raising and teaching children in her work as a sculptor, allowing material to dictate form: ‘What you do is become background, just like a parent allows the child to express himself.’

5 things to know about Ruth Asawa

Volunteering as a teacher in Mexico, Asawa observed a craftsman making wire egg baskets. The technique she learned from him was the first step towards her looped-wire sculptures. At Black Mountain College she made patterned pictures using the college laundry stamp. Later she made prints using cross sections of potatoes and apples. She was inspired to make electroplated sculptures after seeing copper waste products at a chrome-plating workshop.

She was an ardent advocate for public art and creative education

In 1968 Asawa founded the Alvarado School Arts Workshop in San Francisco at a local high school which had no art department. It laid the foundation for an artists-in-residence programme that spread to 50 schools. She later helped establish arts festivals, residency programmes and a centre for the reuse and distribution of arts materials. As an advocate for creative education she sat on the California Arts Council, the National Endowment for the Arts Task Force and President Jimmy Carter’s Commission on Mental Health. Asawa’s many public art commissions include six fountains in San Francisco. 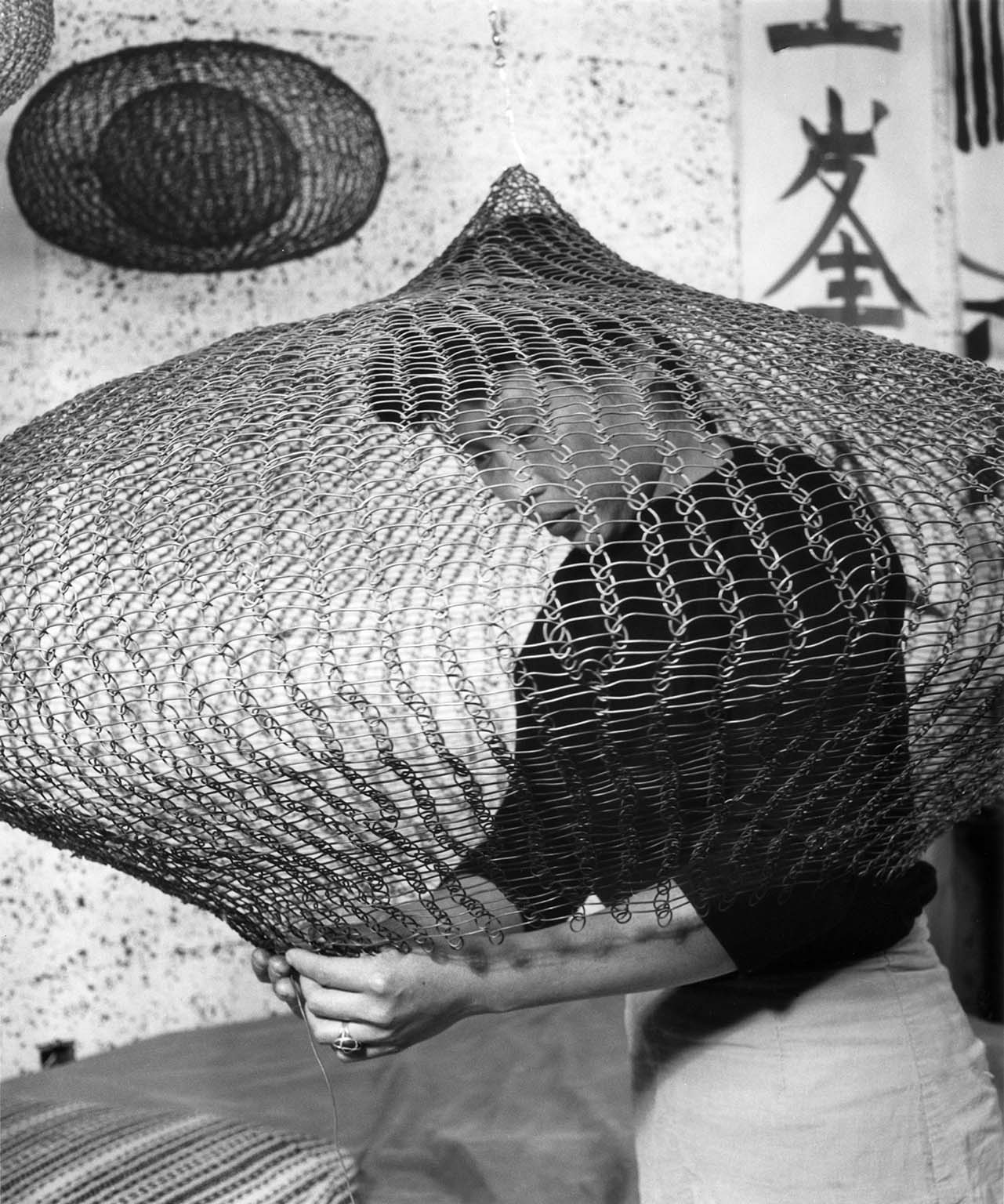 She employed a tough, hands-on technique

All of Asawa’s sculptures are made by hand – the looped-wire works are created with a crochet technique, with the wire bent into an ‘e’ shape around a length of dowel – the work left her fingers cracked and bleeding. Often, she taped her fingertips to protect them. Her children also remember her visiting Goodwill stores to buy old-fashioned fine white gloves – of the kind intended for formal occasions – to wear as protective garb.

She rose above prejudice of many kinds

In the 1950s Asawa had three solo shows at Peridot in New York – an influential gallery that also worked with more established artists such as Louise Bourgeois and Philip Guston. Asawa later said she stopped showing on the East Coast of the US because her sculptures always came back damaged. The patronising tone of otherwise positive reviews of her work may also have played a part: some could not see past her use of craft; others, her Japanese ancestry. One feature, on Asawa and artist Isamu Noguchi, introduced him as ‘a leading American sculptor’ and her as ‘a San Francisco housewife and mother of three’.

We see Asawa now largely through the eyes of Imogen Cunningham

Asawa met photographer Imogen Cunningham in San Francisco when she was 24 and Cunningham 67. They remained close friends for 26 years until Cunningham’s death, sharing a fascination with the botanical world, geometric structure and balanced composition. Throughout their friendship, Cunningham photographed Asawa hard at work: as an artist, a gardener, a mother and an educator, illustrating how each element of Asawa’s life came together in her home.

A version of this article first appeared in the summer 2020 issue of Art Quarterly, the magazine of Art Fund.

Curator Emma Ridgway was supported in her research for this exhibition by a Jonathan Ruffer curatorial grant.