Cathie Pilkington on the theme of the domestic in her work

Ahead of an exhibition at Pallant House Gallery, artist Cathie Pilkington tells Art Quarterly's Anna McNay how she uses the domestic in her work to unsettle and provoke. 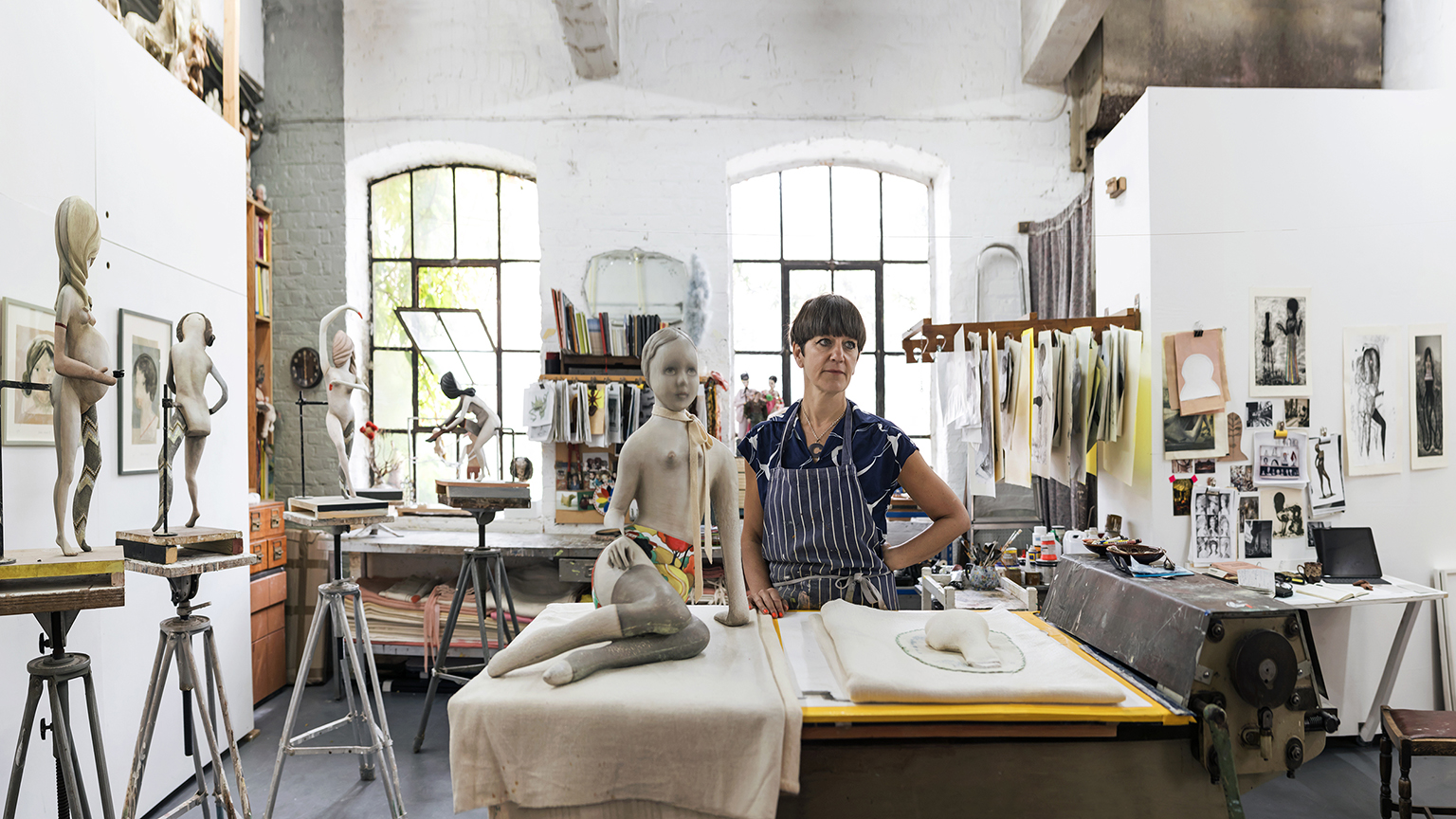 Artist Cathie Pilkington (b1968) is known for her Surrealist figurative works and installations, which often use doll-like forms, and which she creates using a variety of materials combined with modelling and casting techniques.

For her new exhibition at Pallant House Gallery, she will be including her work as part of a reconfiguration of the domestic rooms of the house.

The domestic has always been a strong theme running through my work. When you’re a child, it is your universe. Before you have any idea of history or where things come from, you have a psychological response to objects and spaces in the domestic environment.

I’m really interested in the power of objects, what they can do, and how you can project on to them. I’ve always been fascinated by placement – how you arrange things in a room or studio, and the line between where a work begins and ends. It’s like thoughts – how they cascade. One thought leads to another and they overlap and confuse and become richer or more complicated.

That’s the way I work. I might start off with something that’s very self contained, but then I put it on a surface and that surface is questioned, and it may become part of the work. This is how ideas develop. I frequently take existing works and they are extended by the way they’re recontextualised in the space.

A good example of this is my installation Dummies in a Landscape, which was first shown in the Royal Academy Schools Life Room last year. Two not-quite-life-size, cast-resin figurines are seated on piles of blankets. The blankets form the landscape, but this is also the material that the Dummies are made from. They are assembled like a three-dimensional collage.

I draw on to fabric, cut it out and stitch it so I can fill it with plaster. This gives the limbs a strange and satisfying doll-like volume. These parts are then combined with traditional modelling and casting techniques. The Dummies are propped up on things that look very insubstantial, confusing, or just really intriguing because you don’t know quite what you’re looking at. Everything gets broken down, in a Brechtian kind of way. I’ll show something that seems finished and understood but then you walk around to the back and there might be another head on it or an exposed armature.

I’m constantly saying, ‘Here is an image,’ but it’s a made object. I’m making up this fiction and you can enter it but then I’ll remind you that I made it. I’m trying to invite the audience in to be part of the work. Some of it is left blank, so there’s a conversation going on. I’m not trying to shock or disturb. I’m trying to say, ‘Doesn’t it feel like this, being alive? Isn’t it complicated?’ Rather than portraying some ideal, which isn’t real or that you can’t relate to, I want to talk to people about life. I don’t mind the word ‘provoking’ so much because I want to question norms and certainties of things and ask, ‘What’s really underneath? How has this been constructed?’

Pallant House Gallery wanted to commission an artist to intervene in the domestic spaces in the gallery, the original town house part, and because of the nature of my work I suppose I was an obvious choice. The title of the show, Working from Home, makes reference to the mixing-up of stuff that happens in a house – work and home life, public and private spaces, storage and display, decoration and function.

Coming across a bed in a museum is always strange, so I immediately wanted to do something with the bedroom. It seems like such a rude interruption to the more cerebral experience of going to a museum. I like that jolt. I am using the four-poster bed as an arena for a completely new work, Good-Bed-Bad-Bed, which will involve remaking the bedding using quilting, pleating and painting. The use of the domestic architecture, and having things in cupboards rather than on plinths, will really be exploited as well.

When you walk through the bedroom into the next room, everything feels open and light. I’m putting one of my new Pietà pieces in there and am looking for other things that are light, have drapery in them, or religious themes.

I’m definitely not religious. For me, religion is a construct that fails dramatically. I’m not without empathy for some of the ideas, though – and religion has all the best imagery, so I’m really interested in it philosophically. What it tries to do is also the reason why people make art – attempting to make meaning.

Personally, I find art much more helpful. Artists are just saying, ‘Sometimes it’s like this, isn’t it?’ and trying to have an honest conversation. They are able to talk to people across the centuries, regardless of fashion or history. That’s why I love being able to work somewhere like Pallant House Gallery with all that history, where there is that depth to draw on.

This interview was originally published in the autumn 2018 issue of Art Quarterly, the magazine of Art Fund.