A painting by Charles Napier Hemy that celebrates Somerset’s seafaring history has been acquired by the Museum of Somerset with support from the Art Fund. 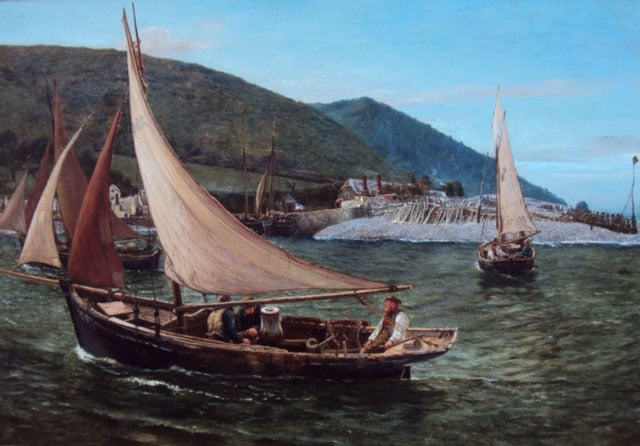 Charles Napier Hemy was a master of coastal scenes. Born into a musical family in Newcastle-upon-Tyne, he was drawn to the sea; he undertook his artistic training in his home city and later in the port city of Antwerp before finally coming to settle in Falmouth. Hemy’s artistic merit was celebrated by the Royal Academy, which elected him as an associate and later an academician, and frequently exhibited his works.

The Museum of Somerset has bought one of Hemy's quintessential marine paintings, Oyster Dredgers at Porlock Weir, 1890. It depicts a crucial part of the working life in the weir at the time; oyster fishing in the area dates back to the early 1700s. However, in the early 1900s, fishing stopped after boats from Whitby reputedly decimated the oyster beds. The acquisition of this painting comes at a timely moment as new oyster beds have been established in Porlock Weir last year, and their harvest and trade is scheduled to re-commence in 2016.

Stephen Deuchar, director of the Art Fund, said: ‘The painting addresses a historically-important local industry in Somerset, little represented in the visual art collections of the museum, but currently in revival. So we’re very pleased to support the acquisition of this attractive and significant work by an artist of national repute.’

Oyster Dredgers at Porlock Weir is now in the museum’s permanent collection alongside other exhibits that explore the county’s history.