Grayson Perry: Top of the pots

To celebrate the artist's new exhibition Provincial Punk at Turner Contemporary, we highlight the best ceramics on show. 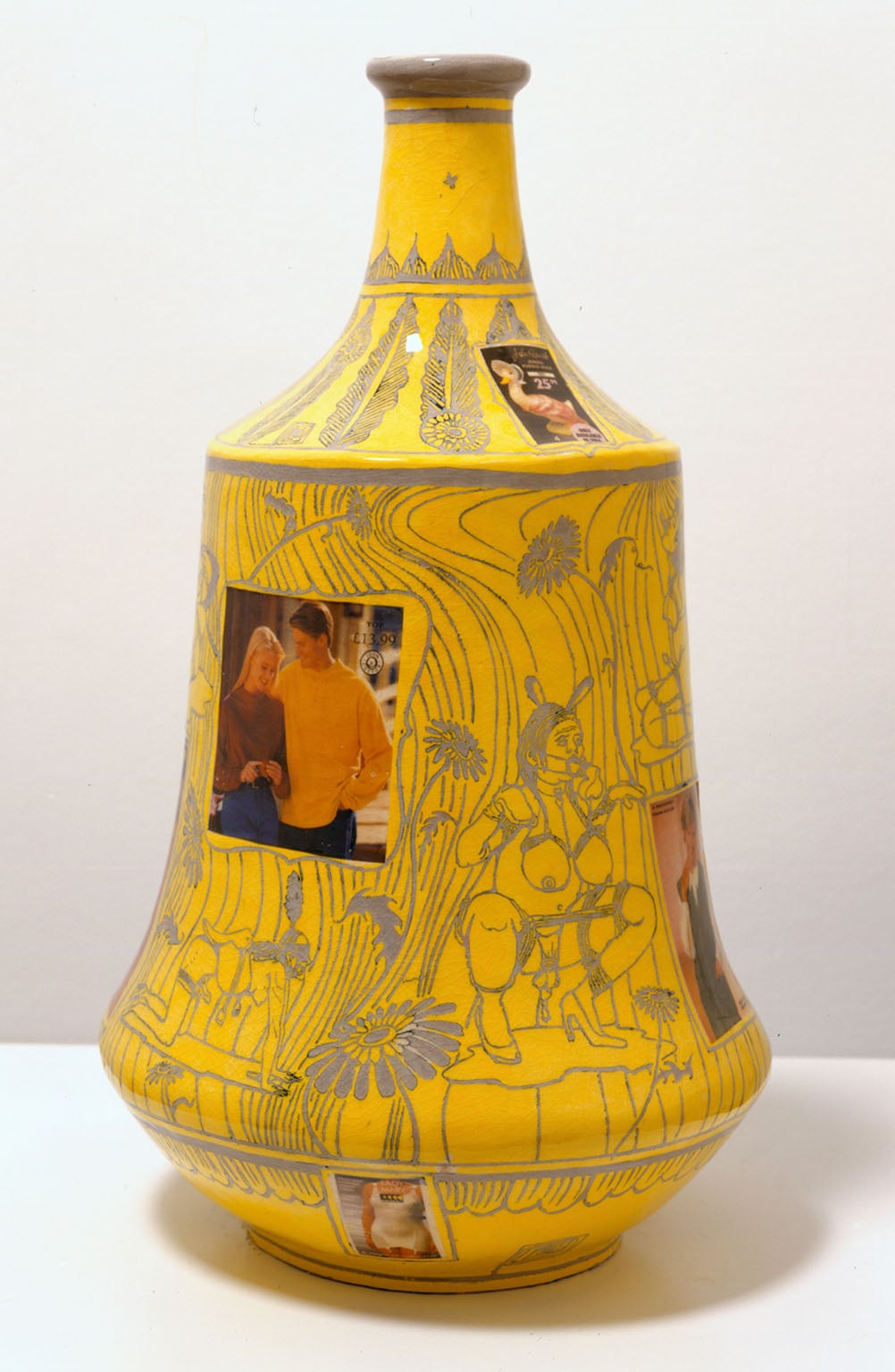 Grayson Perry started making ceramics after attending a pottery class in 1983 where he became fascinated by the medium’s twee and provincial status within the world of contemporary art. Early in his career he also collaborated with the Neo-Naturists, a group who challenged Thatcherite Britain and the high fashion of the era in favour of Romanticism, folk and forms of ‘hippy anarchy’. This early pot captures the mood of the period, subverting nuclear bombs with smiling faces and showing symbols of peace and protest against a backdrop of lush British greenery.

Early acknowledgment of Perry’s transvestite alter-ego Claire is seen in this piece, which presents the fictional woman as a central source of the artist’s creativity. He says ‘I was already starting to build up a narrative of her, a sort of internal iconography’, the pot shows Claire surrounded by religious imagery, descending from on high and patting an angel on the shoulder, as if offering a divine blessing.

(Owned by the Crafts Council)

This poignant ceramic reflects on Perry’s troubled childhood, where he struggled with exposure to sexuality at a young age, grappled with his attraction to transvestitism, and felt out of place as a creative spirit in a working class home. The collaged surface has a somber air, showing a young boy in various guises troubled by cruel faces. This pot also features the final lines of a self-professed ‘terrible poem’: ’I was a mad kid and now I ain’t. I got out ‘cos I could paint.’ It represents the redemptive quality of his talent, but also reflects on the other individuals who were left behind.

Poking fun at the contemporary art world, Perry labels each of his gallery visitors with a designer label, car and postcode. By reducing each person to an identifiable key, he is critical of the fashionable commercial art market and it's audience. On closer inspection it is easy to identify his allusion to various YBAs in the works of art he illustrates, in his wry homage to a Saatchi Gallery show.

(Owned by the Adam and Mariana Clayton Collection)

Perry’s fascination with the notion of taste has been well documented in his Channel 4 television series depicting the division of social classes, and this vase demonstrates the chasm between what would generally be considered good and bad. His collaged motifs of wholesome individuals advertising jumpers are juxtaposed against pornographic drawings. The chosen palette of lemon yellow and blue-grey apparently reminds the artist of upper middle-class drawing rooms.

This recent creation was made as part of another television show ‘Who are you?’ which coincided with an artistic intervention at the National Portrait Gallery. The portrait of the Liberal Democrat politician Chris Huhne – who was imprisoned for perverting the course of justice – is decorated with symbols of the ‘Default Man’, such as his personalised number plate and hundreds of tiny phalluses. Perry smashed the pot, before repairing it with gold, in order to represent the fragile state of Huhne’s public persona.

Provincial Punk is at Turner Contemporary until 13 September 2015.