Now open at the Walker Art Gallery, Liverpool, Coming Out: Sexuality, Gender & Identity brings together work by artists who have used their practice to explore these issues since the passing of the 1967 Sexual Offences Act, including David Hockney, Wolfgang Tillmans, Sarah Lucas and Steve McQueen.

Supported by an Art Fund New Collecting Award, curator Charlotte Keenan McDonald has made a number of new acquisitions for the Walker, including the gallery's first performance piece and tarot cards that form part of John Walter’s Alien Sex Club, a work designed to encourage conversation and raise awareness around HIV and its transmission.

Almost 100 works are on display, making Coming Out one of the UK’s most significant exhibitions to explore LGBT+ histories to date. We asked Keenan McDonald to name just five pieces that offer an introduction to the show.

This film follows the erotically charged encounters of two cowboys in the American Southwest, set in and around San Antonio in Texas. It captures the pair in saturated colour as they meet in the cattle yard, a garden swimming pool and a motel. The work continues Isaac Julien’s interest in themes of identity, masculinity and desire, drawing on the figure of the cowboy in popular culture, simultaneously a symbol of idealised, heterosexual masculinity and a queer icon.

Additionally, the work is layered with references to literature, film and other artists, including David Hockney and Derek Jarman, whose paintings also feature in the exhibition. 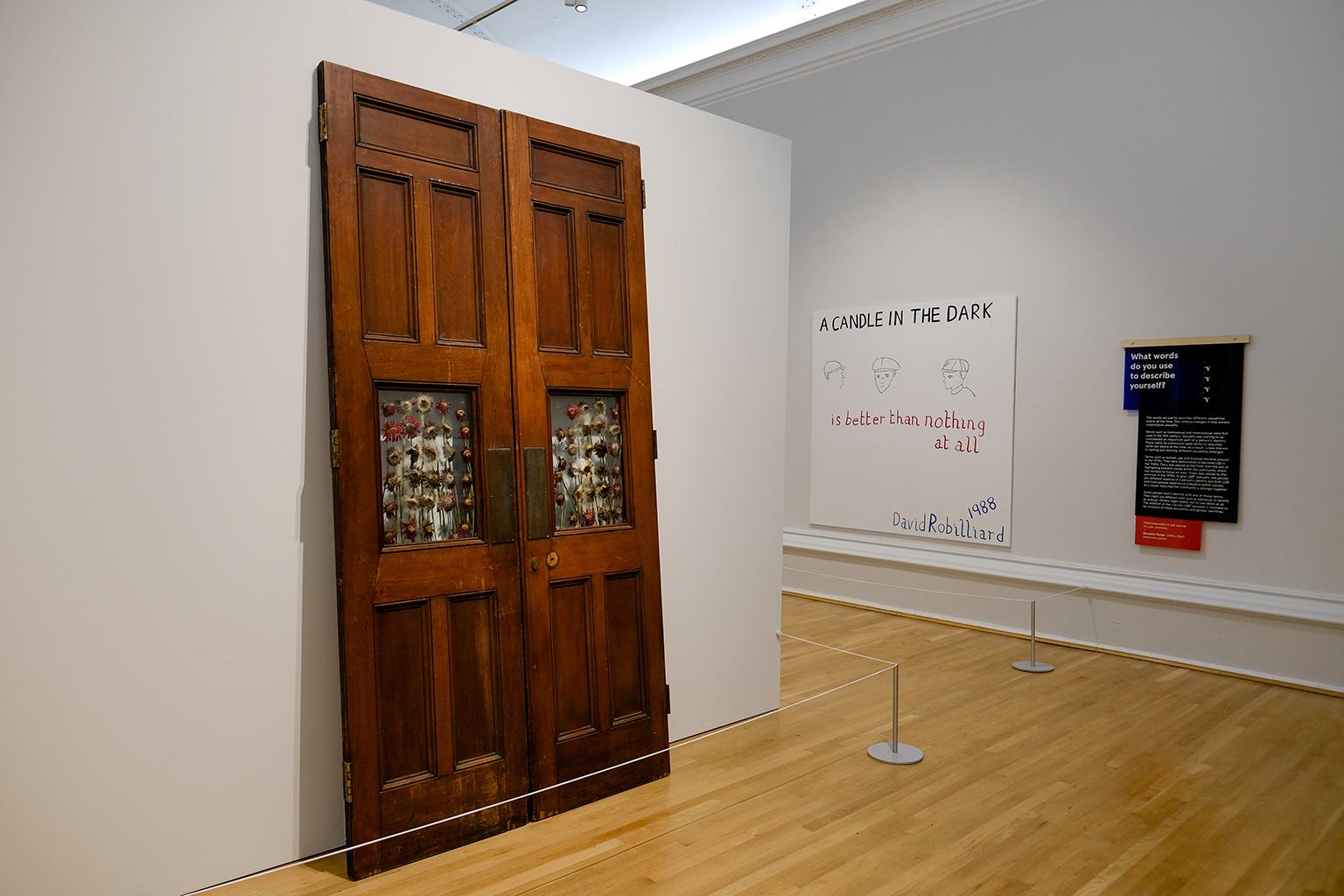 Anya Gallaccio, can love remember the question and the answer?, 2003

Sixty fresh gerbera flowers are placed behind the central windowpanes of the two mahogany doors that make up this sculpture. The flowers remain there for the duration of the work’s display. As they decay and fade, they act as a reminder of how quickly beauty disappears and of the brevity of life.

The title of this work is taken from a poem by WH Auden, To Ask the Hard Question is Simple, published in 1930. It reflects on the author’s homosexuality at a time when sex between men was still illegal. The reference could relate to Gallaccio’s own situation in 2003. She had met her partner in San Francisco but the couple faced an uncertain future. Immigration law at that time in both the USA and UK did not recognise same-sex couples. Gallaccio felt she had ‘a moral duty to be counted’ and became an advocate for gay-inclusive immigration law.

Gallaccio has said: ‘I can’t decide whether my work is linked to my sexuality. It could be, in that it’s fluid and unfixed – it doesn’t feel circumscribed in the way rigid ideas of heterosexuality do – but I don’t want to be known as a lesbian artist. I just find that reductive. With women artists especially, people link some personal trauma with their work. But my aim is to make my work universal, to transcend me.’

Sexy Collages was purchased with Art Fund support in 2017.

This painting was completed during David Hockney’s second year at the Royal College of Art in London. He was becoming more confident about his sexuality and was beginning to express it in his paintings. The inspiration for this picture was a poem of the same title by the influential American writer Walt Whitman (1819-92). Hockney admired Whitman’s poems about same-sex desire and love. He said that the painting relates to Whitman’s idea of ‘adhesiveness’, a force that creates attachment between men.

Hockney’s deliberately naïve modern painting style is inspired by several sources. These include the graffiti found in public toilets, a known cruising spot for gay men. 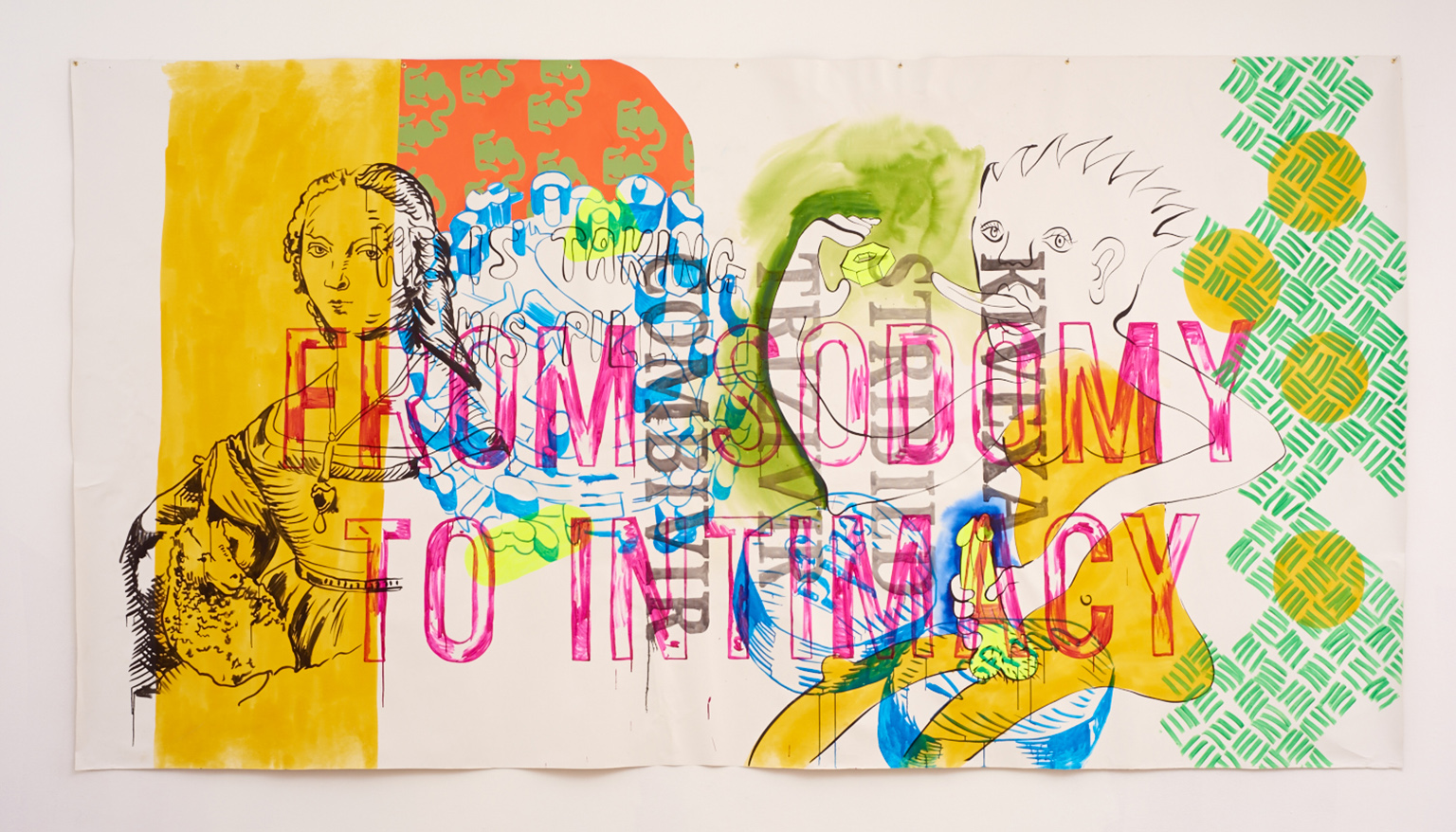 This multimedia work explores sex and sexual health in the 21st century. It is part of a much larger installation of the same name by Walter that was first shown in London and Liverpool in 2015. The artist is particularly concerned with the increasing transmission rates of HIV and the factors for this. Walter’s ‘maximalist’ style uses pop culture, humour and hospitality to broach these subjects in a way that is accessible and engaging. In doing so, he encourages people to think about these important issues and perhaps change their behaviour and attitudes.

The installation at the Walker is particularly concerned with PrEP (pre-exposure prophylaxis). This medication, when taken correctly, can prevent the user from contracting HIV if they are exposed to the virus. NHS England will begin trials for the drug in September this year after a lengthy debate about whether it should be available to people at risk of HIV infection. Many feel the arguments against PrEP reveal society’s continued homophobia.

Alien Sex Club was purchased with Art Fund support in 2017.

Coming Out: Sexuality, Gender & Identity is at the Walker Art Gallery, Liverpool from 28 Jul to 5 Nov 2017. Entry is free to all.