Emii Alrai on getting to grips with scarred histories

Skye Sherwin talks to Emii Alrai about the deep connections – between vessels, bodies, landscapes – she mines in her Art Fund-supported commission for Hepworth Wakefield. 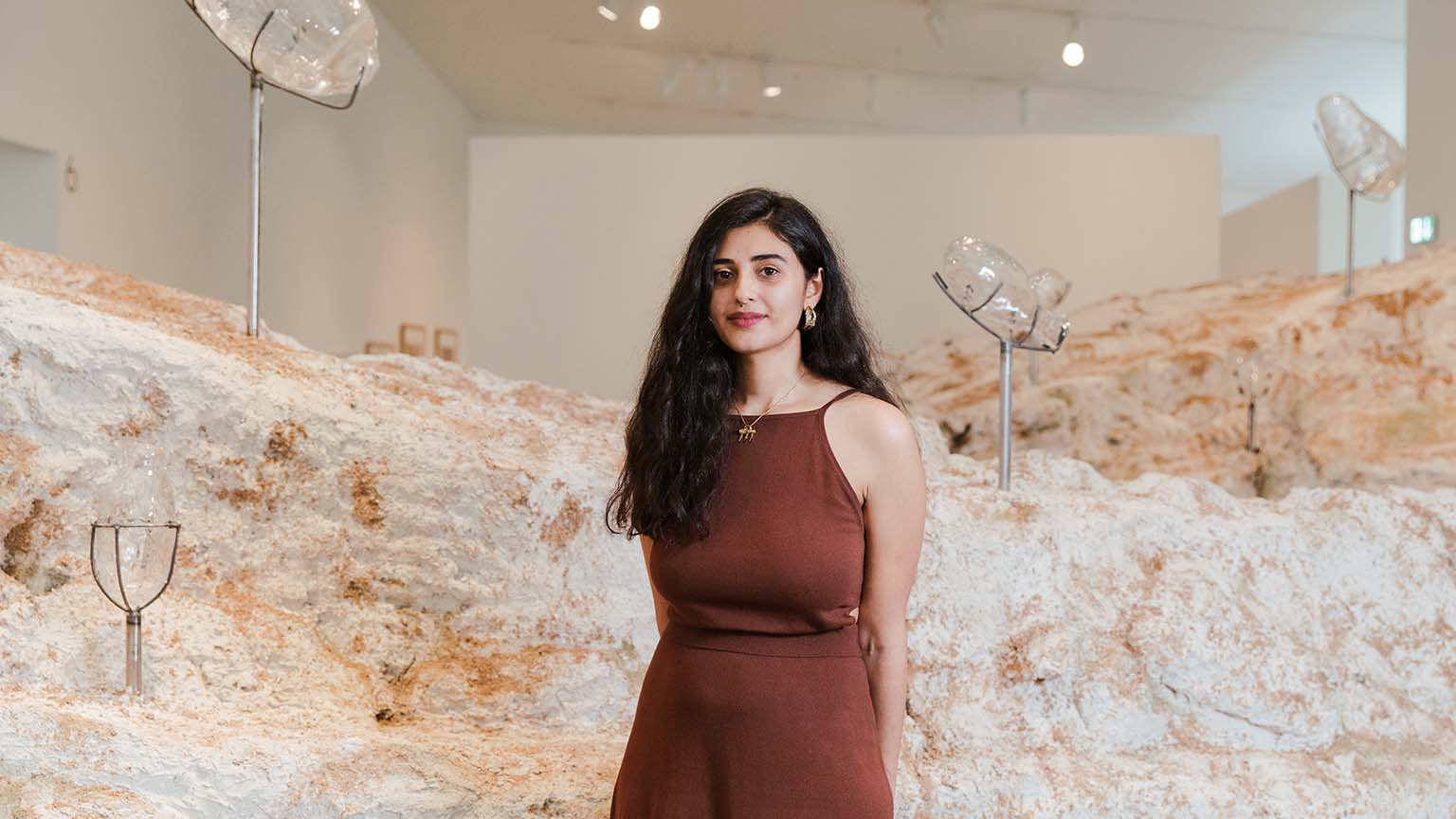 Emii Alrai, with her installation, A Core of Scar, at the Hepworth Wakefield, 2022, Photo: Joanne Crawford

The large clear-glass vessels found in Emii Alrai’s installation A Core of Scar at the Hepworth Wakefield have fragile, uneven skins like that of ageing fruits or rumpled sacks. As with the ancient funerary urns that partly inspired them, they are containers for the invisible, whether long-vanished ashes, souls or memories. Ensnared in metal armatures, these precarious objects have been set within an unforgiving landscape: a swooping grey plaster-and-paint landmass reminiscent of Yorkshire’s Gordale Scar, the iconic gorge that was formed by melting glaciers at the end of the last Ice Age. 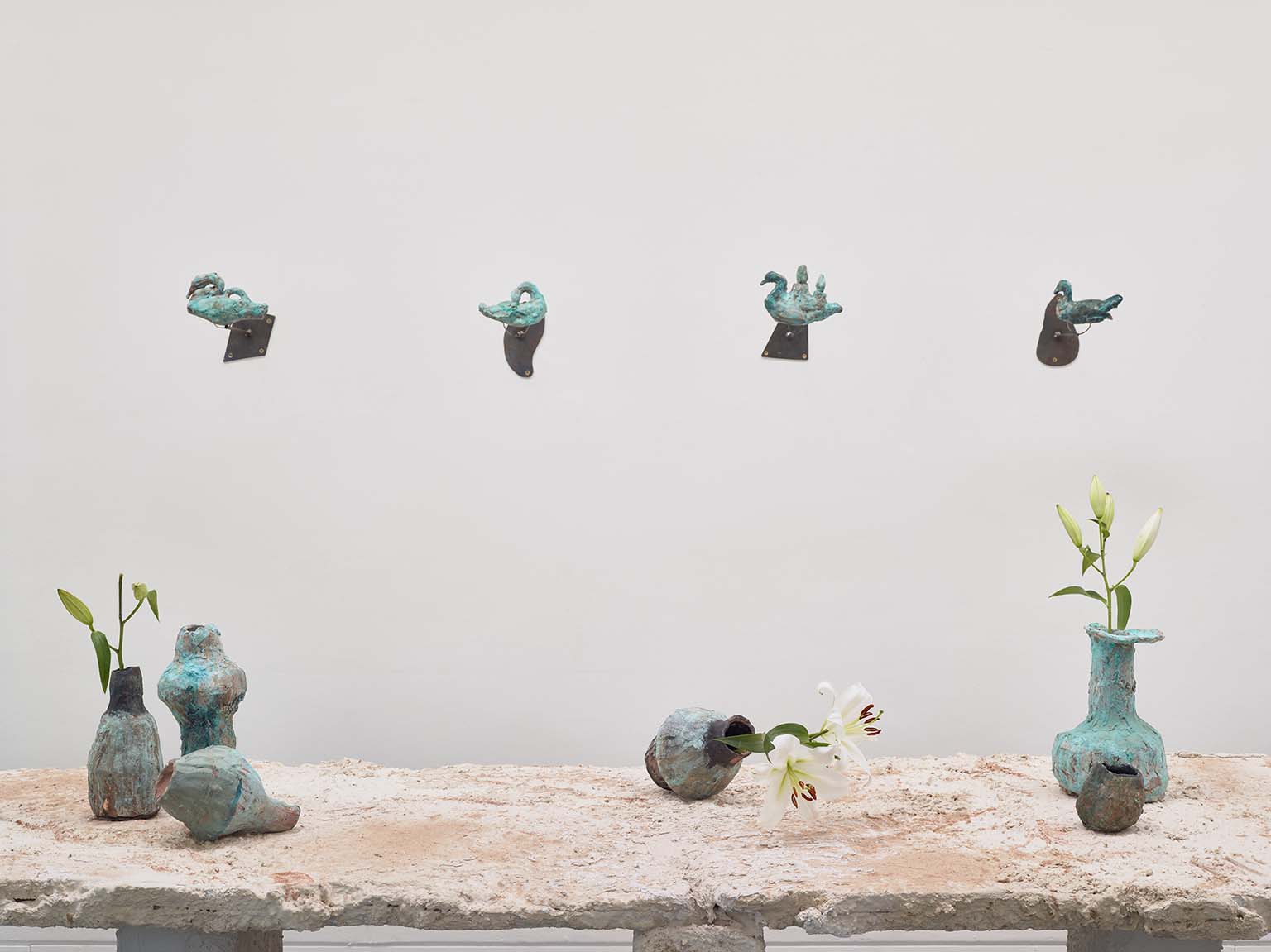 This collision of ancient geology with the human and vulnerable marks a new development for the 29-year-old Leeds-based artist in a number of ways. In the past few years, Alrai’s work has focused on museological display and acquisitions, unearthing the politics behind collections and the histories that they are made to serve. What she calls ‘fake’ artefacts, which she fashioned from clay and then painted to resemble aged bronze, have been placed within environments that reference both museum dioramas and the ravaged sites where archaeological treasures often originate – including, notoriously, in her family’s home country of Iraq.

Being commissioned as the second artist for Future Collect – Iniva’s Art Fund-supported three-year programme to support the representation of artists of diverse backgrounds within UK art collections – to create this new work for the Hepworth Wakefield’s permanent collection has enabled Alrai to move beyond ‘mimicry’, as she puts it, and to experiment with highly crafted objects. Drawing inspiration from ancient glass traditions that originated in Syria, Egyptian artefacts and date-shaped vessels from Pompeii, she collaborated with North Lands Creative, the contemporary glass studio in Lybster, Caithness, in the north of Scotland. ‘I didn’t think that clean blown-glass forms make sense with my practice, which is very physical and about mark-making,’ she says. ‘I built up clay vessels, which became the moulds. The forms that were realised [by collaborating with glass artists] really have marks and scars.’

It’s also the first time Alrai has been able to make a first-hand engagement with place central to her project. ‘My practice is usually very research-based; I normally take a couple of months where I just “nerd-out” on books,’ she explains. Working with the Hepworth Wakefield, however, meant instead beginning her creative journey at Barbara Hepworth’s studio in St Ives. ‘I saw how her works are hosts to nature,’ she says. ‘Then I visited the Lizard and was taken aback by the geological landform of the UK and its points of rupture.’ She then travelled from the southernmost tip of the country to the northernmost, John O’Groats, via the Gordale Scar. ‘It’s been an actual journey through geological time and the effects of the Ice Age,’ she says.

“We all carry sediments from the past through our own bodies, passed through generations, like ancestral memory” Emii Alrai

Displayed in a glass case alongside 18th-century etchings of sites in ancient Yorkshire, her photographs from these trips point to Alrai’s wider themes. Undercutting the belief in progress and rationality avowed by the Enlightenment-era artists who captured awesome nature in intricately delineated black-and-white prints, her images hint at uncertainty and fracture. A rocky shore is cracked with fault lines. A rock emerges from the earth like a severed hand.

Alrai also draws out analogies that she perceives between these landscapes and the migrant experience. ‘When the glacier passed through the Dales, it pulled stones from different areas of Northumberland, all the way through to Yorkshire,’ she explains. ‘Land mass can be an amputation or rupture from a previous geological landscape, and that reflects how bodies can be amputations of geographical landscapes. You might have been born in this country but still bear the scars of movement.’ 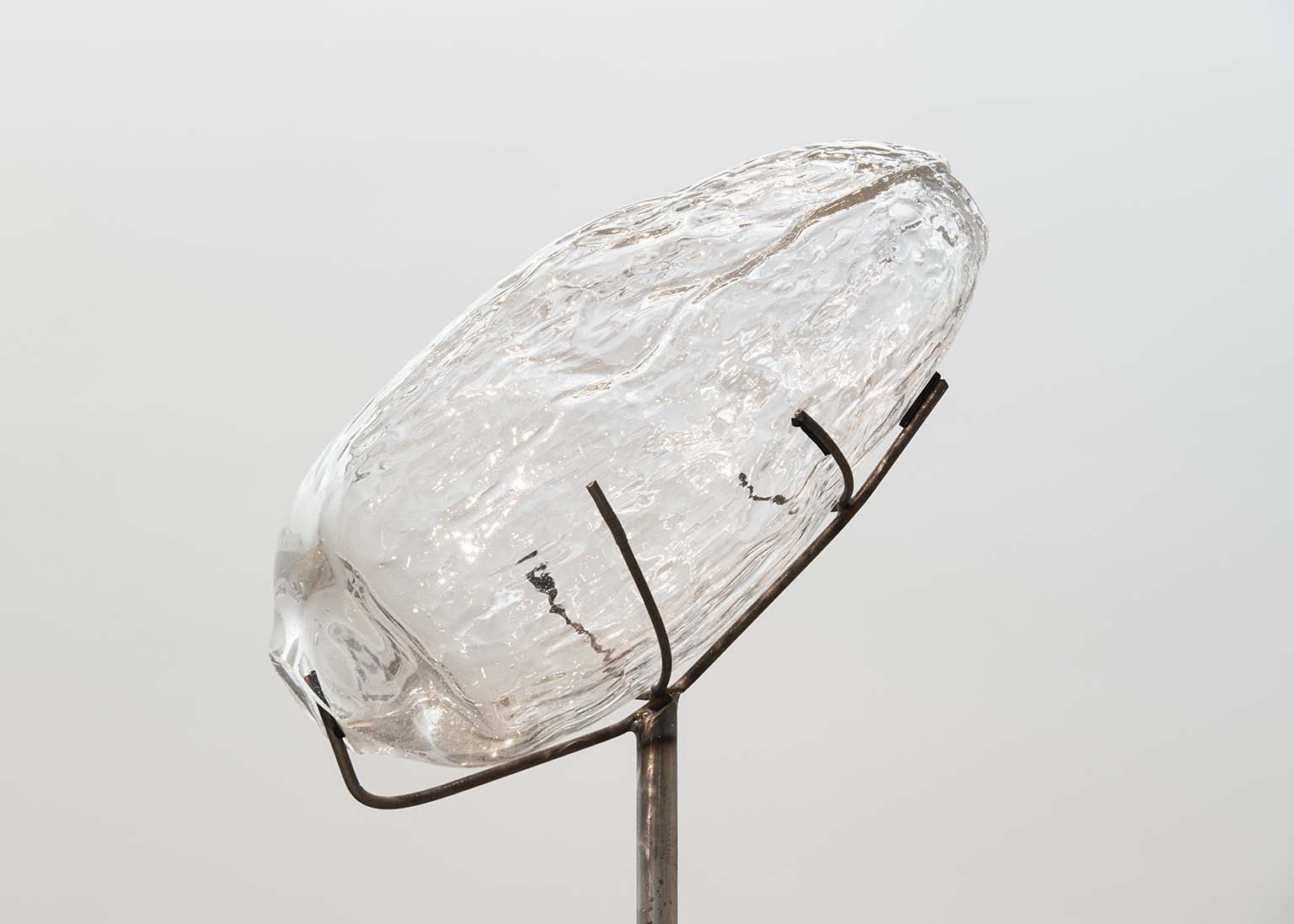 While the scored surfaces of the glass works suggest troubled histories, as vessels they also offer the possibility of continuity and healing. One of the earliest of objects, vessels have been used from time immemorial in foraging and preserving and as a metaphor for people-as-containers. ‘We all carry sediments from the past through our own bodies,’ Alrai reflects, ‘passed through generations, like ancestral memory.’

For the artist, the hulking landscape in which her vessels are set is another potential conduit: ‘Memories can be archaeological, and a sensory installation might activate people’s own histories rather than the kind of histories museums usually ask you to understand as true.’ In one haunting photograph taken at Gordale Scar, for example, thick mist collects in the ravine, like the lost past or the fog of memory, inviting us to plunge within.

A version of this article first appeared in the summer 2022 issue of Art Quarterly, the magazine of Art Fund.

‘Emii Alrai: A Core of Scar – Future Collect Commission’ is on at Hepworth Wakefield until 4 September. 50% off exhibitions and 10% off in shop with National Art Pass.