AJ Dehany is blogging about fig-2's weekly exhibitions – all 50 of them – over the course of a year. A quarter of the way through his mission, he explains why he's doing it. 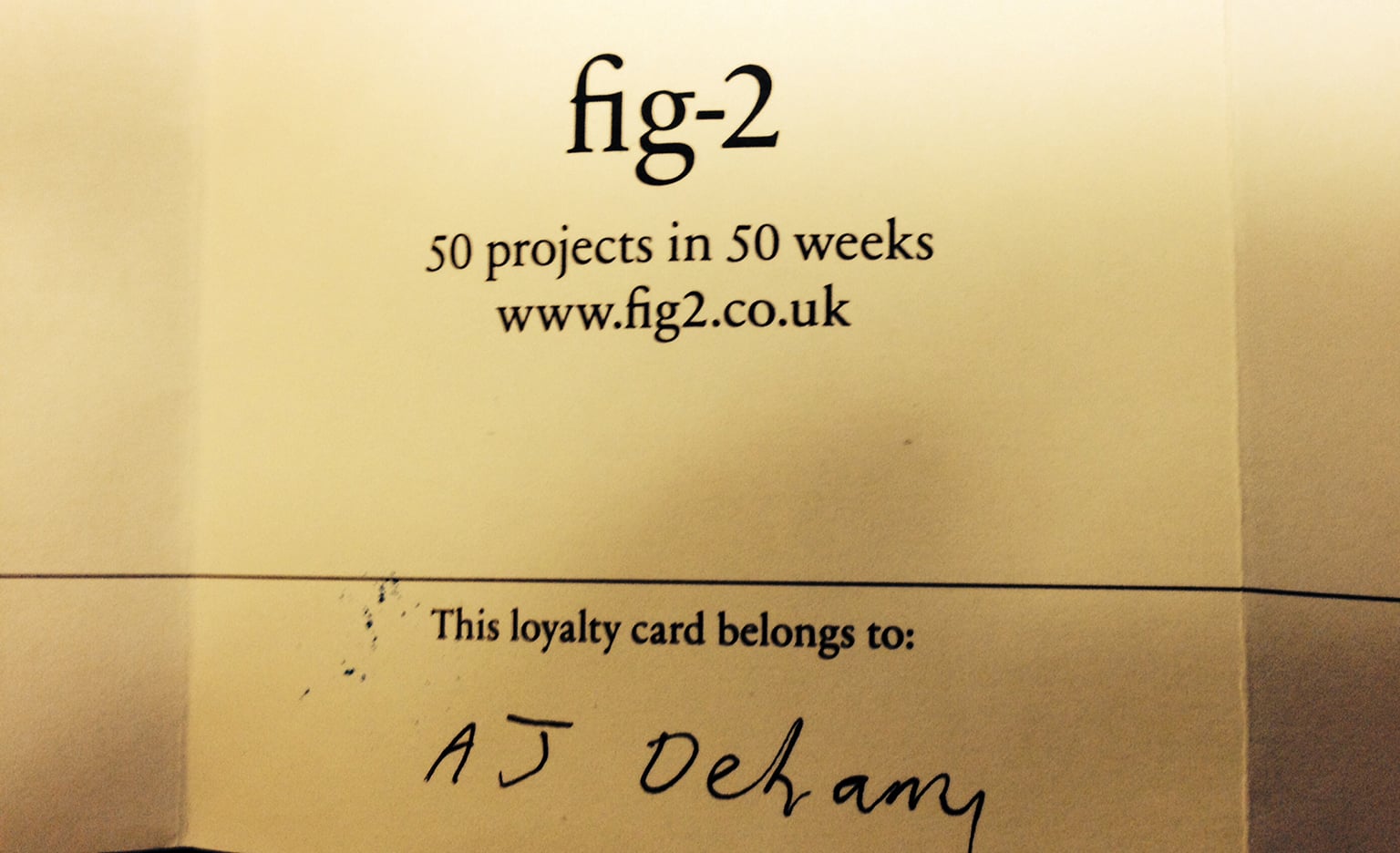 AJ's fig-2 loyalty card, @ AJ Dehany
It’s crazy to put on a completely new art show every single week for a whole year, but this is what curator Fatoş Üstek and her team are doing, and it’s called fig-2.

Since January the ICA studio space on The Mall has been transformed into exhibitions, installations, artists’ workshops, a poetry café and a lecture theatre. I’ve seen film, dance and sculpture, heard lectures, travelogue and poetry, and partaken of an extraordinary range of gin cocktails courtesy of sponsor Sipsmith.

Clearly compulsive minds are behind all this, and that’s why I love the fig-2 project, and why I decided to go to all 50 weeks. It shares my mania. When I heard about fig-2 I had just finished two years of composing a haiku a day and was in the market for something new to take up too much of my time. I have a pathological need for activity. But where other people might do a masters degree or take up yoga, I commit myself to silly projects like posting a haiku a day, writing and recording an album in a month, or flying off to Poland on a whim to interview jazz musicians.

My blog, fig2loyaltycard, is named after the ‘loyalty card’ (pictured) with which visitors can collect a unique stamp each week at fig-2. Those who get all 50 will be entitled to a special fig-2 book and a long lie down. So far I’ve managed to keep up with attending the shows and not falling too far behind with the writing. It’s very challenging because I have a slightly academic bent, so tend to use the blog not just to describe each show, but as a springboard for reflecting on wider issues. My piece for week 8 (Edmund Cook) was half review and half a tongue-in-cheek survey of 'some of the more irritating characteristics of video art'. Week 9 (Deborah Coughlin with Gaggle) broadened into a history and discussion of feminism and female expression.

My silly project has had some unforeseen consequences. I can’t commit to anything on a Monday in case I need to go to the openings (which, by the way, I strongly recommend, and not just for the free gin). I’m constantly late for band practice on Thursdays because there are often fig-2 events in the evening. I’ve had to jiggle all my partner’s holiday plans around so that I don’t miss a week of fig-2 – and just thinking about the amount of writing I’m going to do over the next 37 weeks makes me feel faint.

But the sheer variety of the shows is thrilling, and has meant learning a whole bunch of new stuff each week, basically like doing an accelerated degree in Fine Art. To review the second Art Fund Curator Talk, I had to learn about 'curatorial responsibility' (which is a thing) and Roland Barthes in a matter of days, and I never expected to become so knowledgeable about the use of lichen in dyeing tweed in the Hebrides (courtesy of Rebecca Birch in week 5).

Over the year I hope to expand my awareness of art and culture, meet interesting people, and experiment with a range of writing styles; fig-2 is like a push-notification for sparking creativity.

fig-2 is at the ICA Studio, London, until 20 December 2015. The Art Fund is supporting the project's curator, Fatoş Üstek.