Anna McNay takes a look at this modest but enlightening exhibition on the influential Welsh painter Augustus John. 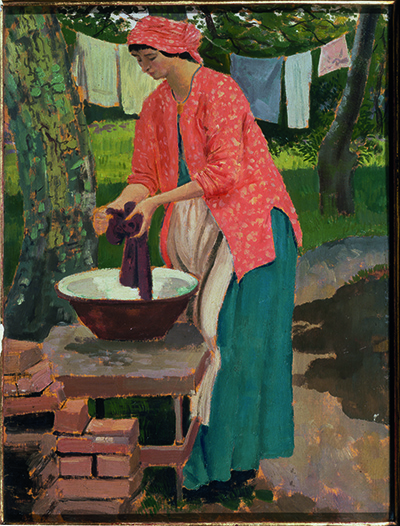 Focusing primarily on Augustus John’s work from between 1911 and 1927 – during which time his family home was just outside Poole – this modest but enlightening exhibition (supported by Art Fund and RA250) includes works in various media.

Standing out most across them all is the artist’s skilful rendering of light and shadow, as in the charcoal drawing Wandering Sinnte (1908-09), depicting a convivial encampment of gypsies sitting around a fire, faces aglow.

Animation is another quality carried through many of John’s best works. His quick sketches and light, bright paintings from the 1910s – exultant in a heather-like palette of mint, lilac, coral and turmeric, with the brightest of sky blues – are, as a result, so much more endearing and enduring than his static portrait commissions.

The key figure in many of John’s works is his long-term partner Dorelia, whose delicate features seem never to age. His renderings of her are always tender, with softer, tidier pencil marks and lighter shading, than, say, the loose, sparse, vigorous lines that make up a sketch of their son, Romilly, or the heavy, darkly outlined eyes in his self portrait from c1940.

In earlier works, Dorelia, who at first lived in a ménage à trois with John and his wife, Ida, and later put up with his affairs, taking in his many children (he fathered 13 by six different women), bears a melancholic air, eyes downcast; in the latest work on show, however, Dorelia Playing Patience at Fryern Court (c1961), she appears at last content, with the faintest flicker of a smile.

Augustus John: Drawn from Life is free to all, until 30 September, Poole Museum.