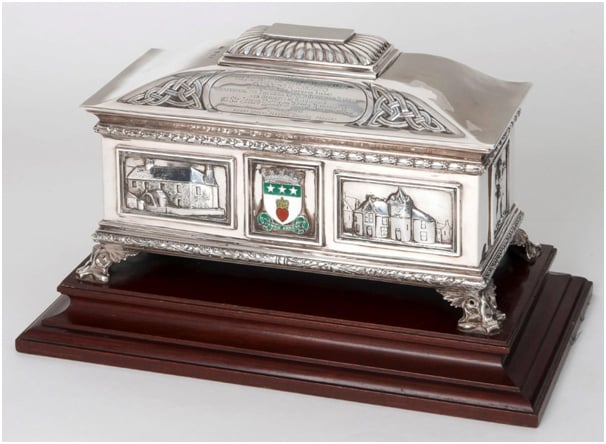 Freedom casket and Burgess ticket by Brook and Son Edinburgh, 1929

The Kirriemuir Museum holds a significant collection of material relating to Sir JM Barrie, best known as the creator of Peter Pan, who was born in the town and who used Kirriemuir and its people as the subject for much of his writing. The museum approached us for the first time for funding towards the acquisition of a silver and enamel Freedom casket and Burgess ticket awarded to Barrie by the Burgh of Kirriemuir in 1930, made by the silversmiths Brook and Son of Edinburgh.

The casket was the ultimate tribute to both Barrie and his close relationship to the town in which he was born and buried. The four vertical faces are bonded above and below with an ornate floral pattern, and feature plaques bearing views of Kirriemuir that were of particular significance to Barrie, including his house, the town’s statue of Peter Pan and the Barrie Pavilion.

It is not only because of its pertinence to Barrie and his beloved hometown that the casket was deemed worthy of Art Fund support, but also as an item of exemplary craftsmanship. Created by Edinburgh silversmiths Brook and Son, the casket is of an eclectic design, combining clean lines inspired by east-Asian design with elaborate decorations derived from medieval Scottish stone carvings.