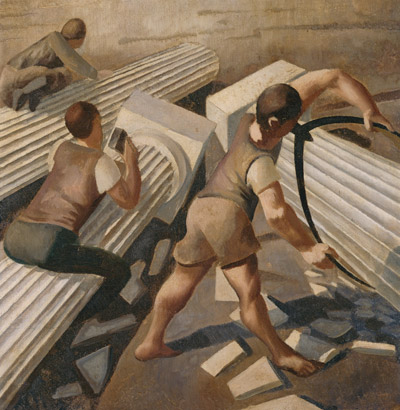 The Art Fund’s Main Grants scheme provides support for museums looking for funding of £7,500 and above. All works being considered for a main grant must be brought to a meeting of our Trustees for viewing before they can decide whether to support the piece or not. When the group of Sir Stanley Spencer works came to the board for decision, there was little doubt that it was an acquisition worthy of this high level of Art Fund support.

The collection – comprising of five works formerly in the collection of Gwen Raverat (1885-1957), granddaughter of Charles Darwin and life-long friend of Spencer – was offered under the Acceptance in Lieu (AIL) scheme from Raverat’s estate and allocated to the Fitzwilliam Museum. This provided the chance for the Museum to acquire the paintings at a substantially reduced cost with the help of generous grants from the Art Fund, the V&A Purchase Grant Fund and the Friends of the Fitzwilliam Museum.

This unique collection of work, spans the first half of Spencer’s oeuvre and represents the key stages in the early development of the artist’s career. Spencer painted John Donne arriving in Heaven (1911) while still at the Slade School, where he and Raverat first met and studied together. The painting was shown at the second Post Impressionist Exhibition (1912), alongside works of the most preeminent 20th-century artists, including Matisse and Picasso. It marks a distinct simplification in Spencer’s style and is one of the first works in which Spencer represents a religious event in an English rural setting, a hallmark of many of his later pastoral masterpieces.

Spencer painted Scrubbing Clothes and Making a Red Cross in 1919 having just returned from war. These studies, originally plans for work commissioned by the Ministry of Information, were never worked into paintings. The studies are, however, significant in themselves, as they went onto form the basis of the River bed at Todorovo, part of the decorations of the Sandham Memorial Chapel, the remarkable mural project Spencer completed in 1932.

The sketches Builders of the Tower of Babel and the small oil painting Making Columns for the Tower of Babel are again the result of a proposed commission, in this case instigated by Raverat, for Spencer to paint the decorative panels for two 10-foot semi-circular spaces over the doors of the Reading Room of the new University Library, then under construction in Cambridge. These studies are of particular importance as they form the only lasting evidence of this unrealised project.

Now on permanent display at the Fitzwilliam Museum, the five paintings are a significant addition to the Museum’s fine collection of early-20th-century British paintings, bolstering the eight paintings and four drawings by Spencer it already includes. It is thanks to the merit of the AIL scheme as well Art Fund support that this acquisition was made possible. Sir Peter Bazalgette, Chair of Arts Council England, said: 'That these five works have been offered in lieu of inheritance tax and can now be permanently accessed by member of the public, means that important parts of our own history, society and identity are not lost, hidden in houses, but are part of an institution’s collection, open to interpretation and educating and inspiring people.' (Arts Council England website, 19/11/2013)