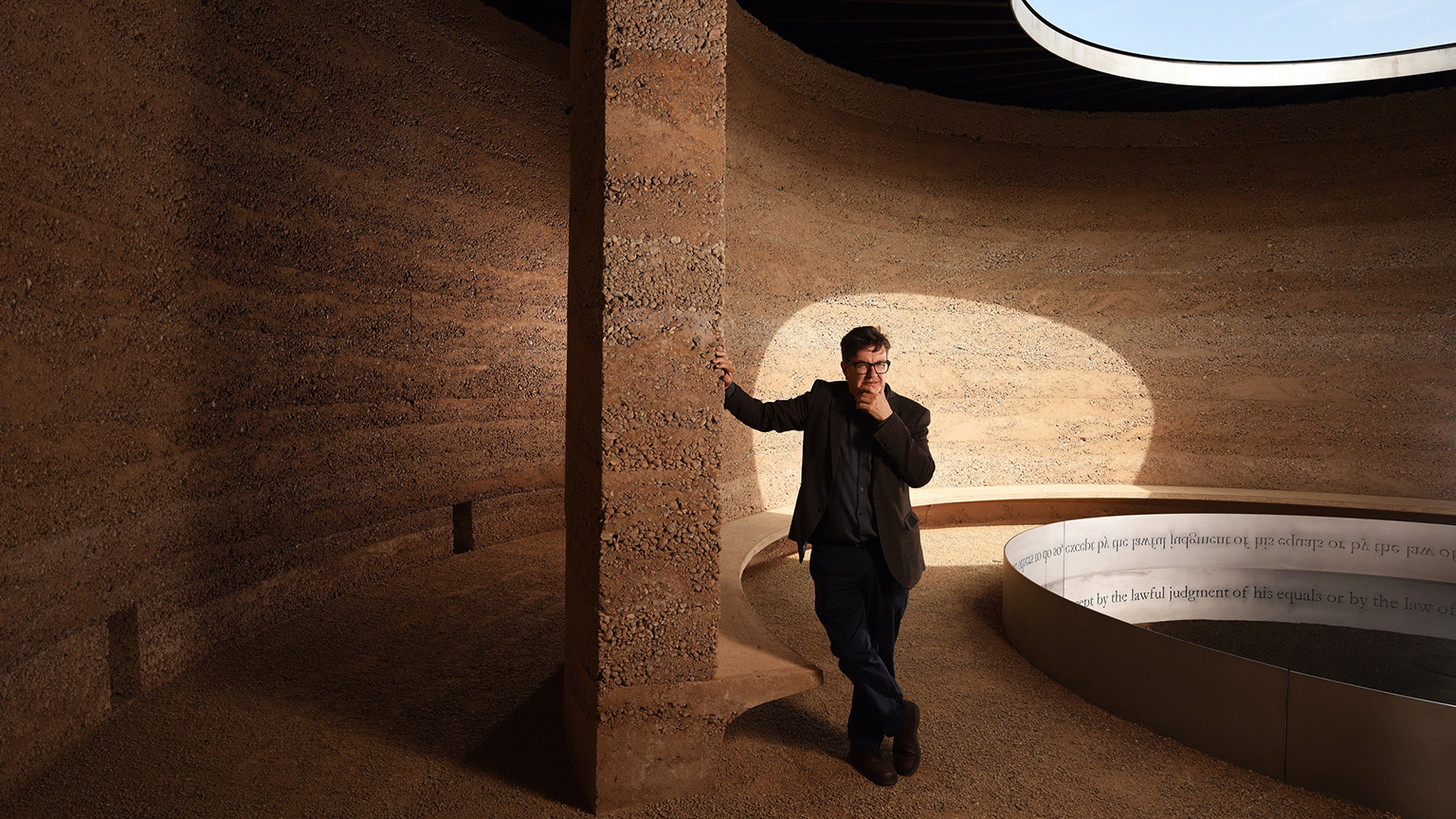 This summer the National Trust, with Art Fund support, gained a new permanent architectural work of art for its site at Runnymede, and a new space in which to contemplate the historic event which makes the Surrey meadow and its surrounding landscape so significant – its location for the sealing of Magna Carta by King John in 1215.

This new public landmark is award-winning artist Mark Wallinger’s Writ in Water. From the outside the structure appears to be a plain, circular, sand-coloured building made from a rough cement mix, but on the inside it’s a beautifully designed, magically reflective environment of sky and water, within which the words of Magna Carta’s 39th clause – the foundation for justice under the law and human rights – are asserted:

‘No free man shall be seized or imprisoned, or stripped of his rights or possessions, or outlawed or exiled, or deprived of his standing in any way, nor will we proceed with force against him, or send others to do so, except by the lawful judgment of his equals or by the law of the land.’

‘Clause 39 was always going to be the starting point because it still resonates,’ Wallinger explains, ‘and because we don’t have a written constitution, it doesn’t exist unless and until we give it a sense of importance. What we consider our birthright is actually man-made, and in that sense it’s illusory.’

If the 10 minutes it takes, walking along the side of the meadow, to reach Writ in Water – hidden from view from Runnymede’s main visitor information, tearoom and picnic area – feels something like a pilgrimage, that’s all part of the experience. Arriving at the structure’s entrance visitors then face a choice of turning either left or right. Both paths take you along a curved, labyrinthine passage, the crunching of stones underfoot, the only accompanying sound, adding to the build-up.

The passage then opens out into an airy circular light filled space. At its centre a large round pool is contained by a metal rim on which is inscribed, in reverse lettering, the words of clause 39, which only become fully readable in the form of its rippling reflection. Above the pool a wide circular opening (occulus) reflects the sky and the branches of an ancient oak tree in the water beneath.

‘The idea of the labyrinth is that you just keep going until you reach the centre,’ says Wallinger, ‘unlike mazes which have false trails, labyrinths don’t, so it’s like faith or courage. You’re rewarded either way you go.’

Commissioned by the National Trust, the project was co-produced by arts organisation Situations, in collaboration with architects Studio Octopi. The initial ideas behind Writ in Water, however, come very much from Wallinger, an artist whose previous public works with an engagement with power, authority, and social and political justice include his 1999 sculpture Ecce Homo, a vulnerable, life-sized Christ figure which was the first work to be installed on the empty fourth plinth in Trafalgar Square. For State Britain (2006), Wallinger reconstructed in Tate Britain the handmade banners, placards, flags and photographs that peace campaigner Brian Haw had amassed in Parliament Square.

Wallinger has incorporated references to power, as well as the acknowledgement of time and history, into this project in ways that may not immediately be obvious. The use of a circular structure denotes a space with no hierarchy, while the 12 low window apertures and 52 wooden roof beams intentionally use measurements of time.

What Wallinger hadn’t intended was how quickly the local wildlife have taken to the work. There are families of swallows already nesting in the roof, which Wallinger admits to being delighted about, before adding that bats might like it there too.

Writ in Water may be the perfect space for contemplation, and for nature, but as Wallinger reminds us there is a more insistent message. ‘It’s also a recognition of how easily religion, ideology, populism or fundamentalism, with their easy solutions to everything, can sweep things away.’

Writ in Water is free to all, Runnymede, Surrey.

This feature was originally published in the autumn 2018 issue of Art Quarterly, the magazine of Art Fund.